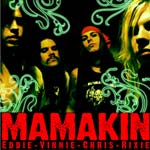 Review:
Mama Kin, a Swedish band that I have reviewed a couple times in the past, are back once again with a new set of demos and a second guitarist. The extra gunslinger has really fleshed out the band’s sound as they mature and continue to capture a party rock atmosphere.

The first two tunes represent the alcohol, the women and the fun of partying, while the third song is the morning after hangover (it only seems fitting). The rockers here are very up-tempo and fun with simple yet effective guitar patterns and some cool solos (especially on “Higher & Higher”) while vocalist Chris sounds like a gritty southern version of Kiss‘ Paul Stanley, minus the lisp and homosexual tendencies. “Sunday Morning” could be the coolest ode to hangovers since Junkyard‘s “Don’t Give A Damn”. It sounds like Jeff Healey (remember him, the blind blues rocker from the movie Road House) tackling an acoustic number while feeling down and beaten – “but that won’t stop me from drinking again”. You gotta love Mama Kin‘s dedication.

Mama Kin just seems to keep on improving so I think it is time for a full-length release. Let’s see if they have enough killer tunes up their sleeve for an entire album, because we know they can deliver on these mini demo EPs. Check out their revamped website at the new address of www.mamakin.se and listen to their party rock anthems, you won’t be disappointed.