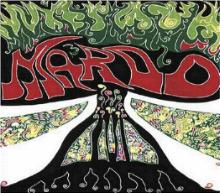 If that sounds rather strange, good, because Mardo is a bit strange themselves. Perhaps they wouldn’t have sounded so bizarre if it was still the 70s, but their brand of experimental retro rock is a breath of fresh air in this day and age. The brothers haven’t just honed the craft of harmonies, fuzzy guitars and distorted vocals – but more importantly, know when to apply each element.

Things start off with the catchy and harmonic “Anyone But Me”, with a heavy beat and some short but sweet solos. That song, “Poor Paul” and “Cold Creepin'” are incredibly catchy with their overuse of “yeah, yeah”. In fact I can’t decide if I like “Poor Paul” or “Cold Creepin'” better, both are like listening a 70s rock version of Enuff Z’Nuff. “Broken Bones” sees the band stepping away from their trippy delivery for a straight-ahead rocker and the results are impressive. “Hey Girl!” sounds like a mellow Bon Jovi number during the verse before shifting into a Cheap Trick like chorus.

This is a cool album that has many faces and walks the fine line between originality and retro. Occasionally the distortion and effects just become too much, like on the cover of “I Want A New Drug” – but for the vast majority of the album the brothers mix together the right amount of ingredients. Sound samples can be found at www.mardomusic.com.