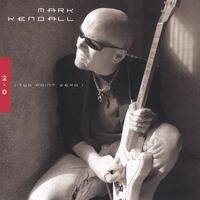 Review:
I’ve been one of the few to champion Great White‘s Mark Kendall as one of the best guitarists in all of rock, for proof just check out his blues soaked solos on Psycho City. So to say I was looking forward to 2.0 (Two Point Zero) would be an understatement. Maybe my expectations were too high, because this album has left me a bit disappointed.

I figured Mark would explore the blues on his solo album, so I wasn’t surprised by the tone of the record. What did surprise me is the lack of killer guitar solos, because blues rock usually makes for great guitar albums. So what it comes down to is that I’m not disappointed by what is on the CD, but rather what isn’t on the release. All it would have taken to impress me would have been a two minute guitar solo on every track – I know Mark is capable, but they are missing.

Mark does all the vocals here and sounds like a cross between Stevie Ray Vaughan and David Lee Roth. In fact many of these songs remind me of Diamond Dave experiments – for instance “Buckle Down” and “Still Dreamin'” would have fit perfectly on A Little Ain’t Enough. If any of you have heard Doyle Bramhall‘s Welcome you will have a good idea of what kind of music graces 2.0 (Two Point Zero).

Now I’m not saying this is a bad album, just that by being a huge fan I know it could have been so much better. But the album is dedicated to Ty Longely and the families of the February 20, 2003 disaster, so maybe this wasn’t the time to be flashy. I’m glad Mark let loose on songs like “Heartbreakers”, “You Lift Me Up” and “Fantasize”, I just wish he would have let loose on the entire album. You can buy the album at www.bigfinmusic.com.