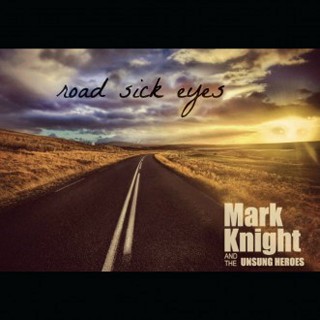 Review:
Some of you may recognize the name Mark Knight, a guitarist who came close to making a big splash with a band called Bang Tango in the late ’80s. Throw in his former Bang Tango bandmate Tigg Ketler, the guitarist who replaced him in that group Mark Tremalgia and Rhino Bucket bassist Reeve Downes and you end up with somewhat of a super-group known as ‘The Unsung Heroes’. Now forget I mentioned any of that, because Road Sick Eyes has practically nothing in common with the aforementioned hard rock bands.

No longer attempting to overpower you heaviness, on this album Mark Knight slows things down while venturing into Tom Petty and Gregg Allman territory. It may be a stretch for old Bang Tango fans to accept this change in style, but because the guitar still drives the music its worth a listen. I’ll be honest, some of this album is too mellow for my tastes but there are also some real gems to be found.

The opening “Pack It Up” and first single “Lies” deliver a solid one-two punch to kick off Road Sick Eyes. Both are drenched with ’70s influenced blues rock with “Lies” containing some great slide guitar and whiskey soaked vocals. After the stumble that is “Monkey Boy” comes the album’s shining moment “7 A.M.” — an exercise in honest hard rock with a picture perfect yet sinister guitar tone. If the entire Road Sick Eyes album followed the blueprint of “7 A.M.” we’d all be in for a hell of a treat.

“Sink Your Teeth” into is a stripped-down acoustic number that builds itself up to the chorus, but what impresses most about the song is how Knight sounds as if he is pouring his heart out with every breath — the title track uses a similar approach but doesn’t create the same emotional firestorm. Despite its title “Slow Down” is one of the more up-tempo tracks presented here and recreates The Black Crowes‘ mid ’90s drug-induced experimentation days — however this proves the be the album’s final rocker.

Road Sick Eyes sounds as if it was put together by a group of aging musicians sitting around the campfire reminiscing about their decadent pasts. Under a clear sky, with acoustic guitars in hand, the performers strum away, share laughs and have a few drinks. As the night drifts into morning, and the alcohol starts to take effect, the guys plug in and start rocking out like they did in the old days. Road Sick Eyes sounds just like that image, both extremely mellow on one hand yet gaining momentum on the other. The disc definitely won’t be for everyone, but you have to admire how Mark Knight has laid his soul on the line for everyone to view — plus the guy can still play a mean guitar!