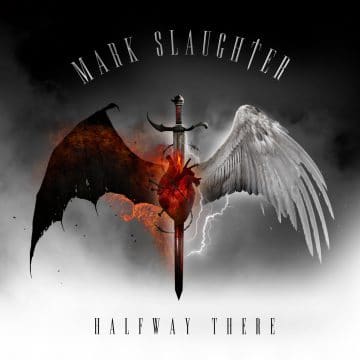 Review:
What can I say about 2017 so far? It’s astounding at the number of new releases that are being thrown at us by artists who were a big part of the ’80s hard rock genre. The really important thing about these releases I may add is that of the ones I’ve heard, they are all outstanding. In an age where people generally don’t pay attention to the things that were important to them 25 years ago, it is great to see all these great musicians still kicking ass. A good friend of mine always jokes when someone says to him “Oh that band, I used to like them”. Huh? Then his response is met with dismay and always a touch of sarcasm, “You used to like them? So why don’t you like them anymore?”

I guess what I’m eluding to is the fact that in North America especially, we are a throw away society. Here today, gone tomorrow. I have to admit in the ’90s, the hardest thing for me was watching all the bands that I grew up listening to, being thrown away like yesterday’s news. Two years prior, you were on top of the world. You could do no wrong. Now due to changing fads, you’re no longer relevant. In my eyes, that makes no sense. I can’t think how many times in the early ’90s, I’d open up my latest copy of Metal Edge Magazine and there would a track listing for an upcoming release. Then a couple months later, it would be announced that that album would not see the light of day because the record company had decided to shelve the album and move on from the band.

One of those bands that I remember this happening to was Slaughter. Luckily the album I am referring to, Fear No Evil, would see the light of day, later being released by CMC International. A much smaller label than Slaughter’s previous label EMI/Chrysalis. It was funny because some of the tracks that were in the initial listing on Metal Edge were left off the album. “She Knows How To Rumble” is one that comes to mind. Luckily I would get my hands on this song as it was released for Japan only on the Victor Records release, Hard Times EP. The reason I say all this is because in the last few weeks, it has become apparent to me, from various conversations, that so many people are unaware that bands/musicians like Warrant, Night Ranger and Mark Slaughter are still releasing music. What started in the ’90s has gotten even worse over time. So my hope is that with my writings, it will bring people’s attention to these bands, that to me are still very relevant in music today.

So as I ramble on about “Days Gone By” (no pun intended), this brings me to 2017 and the release of Mark Slaughter’s second solo release in two years. Mark Slaughter‘s follow up to 2015’s Reflections In A Rear View Mirror — Halfway There — is really an astounding piece of musical work as you will read below.

The album starts off on an immediate high note. “Hey You” starts with a killer, heavy riff. Mark Slaughter is heard in the background as the song kicks into the verse. This is classic Mark Slaughter, with huge vocals. As I listen, I can’t help but think that no one in this world really sounds like Slaughter. He has a distinct way of singing that is so infectious. A great slide solo is heard, then Slaughter, who is a very accomplished guitar player, ends it off with a fast, ferocious lead. I will note that for those who are unaware, that Slaughter before joining the Vinnie Vincent Invasion was not only the singer in his band Excursion, but the lead guitarist as well. “Devoted” starts with a very modern sounding, heavy riff. Slaughter’s vocals are distinctly layered over top of the very heavy riffing. This song works very well, as Slaughter shows a heavy side to his writing skills. “Supernatural” is not only a fantastic, earthy song, but really has a cool story behind it.

For those that keep up with the goings on of Slaughter, then you have seen the video where Slaughter professes to have included the late Tim Kelly on this cut. Slaughter used Kelly’s Grape Jelly Robin Guitar on this track. I will say that knowing this, it really adds a mystical feeling to this song. “Halfway There” slows the tempo down slightly. This heartfelt ’80s type piano ballad really shows the versatility in Slaughter’s great songwriting. “Forevermore” could be one of my favorite tracks. The intro reminds me of Harem Scarem’s “Slowly Slipping Away.” This is song is so commercially uplifting it hurts. The build ups from verse to pre chorus are perfect. Slaughter’s guitar solo fits this piece so very well. The breakdown before the key change has a “Stick It To Ya” feel to it. “Desperately” comes to mind for some reason. If it was 1990 all over again, this song would be a hit. With that said, maybe this one could be a game changer. Radio decides to actually give good music a chance and play this track. I wish this could be true, but I highly doubt it. Sometimes the truth just cuts me deep.

The album now takes a turn. The road is winding and Slaughter really shows more versatility. “Conspiracy” has a very big vocal with Slaughter singing in different registers. It has an Alice In Chains feel. In other parts, there are pieces of Ozzy to be heard. The guitar riff punches you right in the face. The guitar solo yet again fits perfectly. “Reckless” starts very dramatically as it builds into another great heavy riff. It’s reminiscent of Zakk Wylde with great pinch harmonics. The verse changes coarse and features great picking guitar notes beneath Slaughter’s killer groove. Great feel to this heavy rocker. “Disposable” starts with children heard in the background. Once again Slaughter is throwing another curve ball at the listener. Being a huge fan of The Beatles, I can’t help but make the comparison. The versatility this man shows is immensely impressing. The cello is such a nice touch and the chorus really sounds huge. “Turn It” goes into a cool, melodic lead right off the hop. Slaughter really has a way of writing a great hook. I like the “la, la, la” heard underneath Slaugher’s distinct vocal styling’s. In some ways, I hear Bon Jovi’s “Two Story Town” within the chorus. Not a bad thing, since I love that song. “Not Here” is another track which has a great Beatles feel to it. It closes the album off nicely. This song is very free and open. The vocal is very smooth and helps convey Slaughter’s point within the lyric. Very cool moving guitar solo.

Overall, another great listen from a musician that I have so much respect for. As I stated, Slaughter’s versatility is so evident. For fans of the band Slaughter, this is a must have, but also for those also looking for a simply diverse and moving album, Halfway There is very worth checking out. I must mention that Slaughter’s label has created some cool packages for purchase. This album will be available on CD, download and vinyl. For me, the vinyl is something I will have to get my hands on. As for the record label, this album is being released by the EMP Label Group. The “E” stands for Ellefson, as in Dave Ellefson from Megadeth. I make mention of this because I think it is outstanding to see a label run by a musician. I will also give a big thank you to Shauna from the label. Shauna was kind and gracious enough to make this review happen before the release date. She was very helpful with any questions I had regarding the album itself as well.

Reviewed by Tyson Briden for Sleaze Roxx, May 2017

ULTIMATE CLASSIC ROCK brings you the exclusive premiere of “Devoted” by Mark Slaughter. From the upcoming album HALFWAY THERE, in stores May 26th from EMP LA…