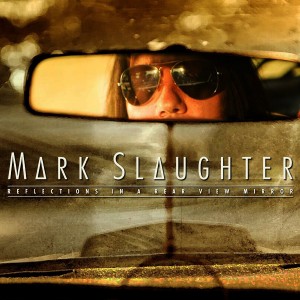 Reflections In A Rear View Mirror is exactly what a solo album should be. An artistic expression outside the artist’s regular environment. And, not unlike Tom Keifer‘s recent solo album, Mark manages to successfully explore new musical territory without alienating his band’s fan base. Mark handles all of the music on this album with the only exception being the drums. Knowing this fact makes his solo effort even more impressive. It’s obvious that he has a really good ability to develop memorable melodies and understand good song arrangement. A great musician in his own right, he gets a chance to showcase his talent on guitar, bass, keyboards and even a few unexpected instruments, such as a Native American flute, mandolin and saxophone.

Tracks like “Carry Me Back Home,” “Don’t Turn Away,” “Velcro Jesus” and the instrumental “In Circle Flight” is where he really branches out and let’s you know that this is indeed a different project from Slaughter. However, as I stated before, Mark was able to experiment without alienating Slaughter‘s fans. There are plenty of tracks here to please his long-time fans. In fact, the remaining songs sound like they may have been written with Slaughter in mind, but maybe were just different enough that they didn’t quite fit on a previous effort. Fans of Slaughter will easily adapt to the different sounds that Mark brings to this album without feeling like he’s completely changed course.

Not only is Mark a talented guy, but I also get the sense that he’s a genuinely nice guy. He actively participates in charity work with St. Jude Children’s Hospital and when he released the first single from this album, entitled “Never Givin’ Up,” he donated a portion of the proceeds from the sale of the single to the Red Circle Foundation, a non-profit organization providing immediate gap funding assistance to the families of United States Special Operations Forces.

If you’re a fan of Slaughter or just a fan of great music, you should really enjoy this album. This is an impressive debut that deserves to be heard.