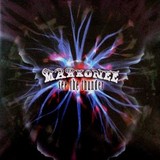 Production:
Produced by Markonee and Oderso Rubini. Mixed and mastered by Beau Hill.

Review:
Things have changed quite a bit since Markonee first came upon the scene. After releasing their debut The Spirit Of Radio in 2006 the band quickly regrouped with a new singer and rhythm section and revamped their sound. On See the Thunder the sound these Italians came up with is pure 80s hair metal.

New vocalist Gabriele Gozzi also fronts Killer Klown, who released an album of their own in 2009, but Markonee is far slicker in sound. With famed producer Beau Hill handling the mixing duties is there any wonder that this CD has a feel similar to bands such as Warrant, Europe and Winger? In fact Markonee recently wrapped-up an opening slot with Winger, so you can’t help but make comparisons between the two.

While listening to See The Thunder, you begin to feel as if this band is from the wrong time. That doesn’t mean they sound dated at all, just that this is the type of music that made women wet their panties, and men envious, in the late 80s. The title track, “Shores Of Another Sea”, “The Big K”, “The Cross Between The Lines” and “Back On Me” all capture the 80s sound perfectly and conjure up images of teased hair, flamboyant wardrobes and endless parties. Because of that this CD rarely lets the listener down, but it also plays things fairly safe and doesn’t bring anything refreshing to the table.

Gozzi sounds ‘cleaner’ and more mature with Markonee than he does with Killer Klown. For my money though I prefer the grit and energy of Killer Klown more than this, although Markonee has a greater chance for success as they are far more accessible for the casual listener. And by all accounts Markonee put on a great live show, so with time this band may grow into something very special.