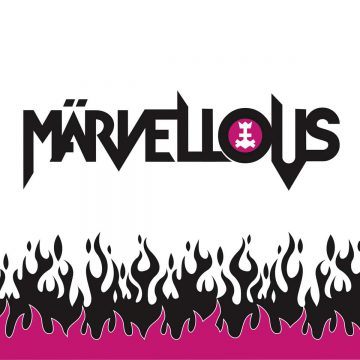 Review:
Just under two decades ago, I stumbled across the band Märvel while waiting for what I was sure to be a blank return on a search for glam rock bands on a website aimed to host and promote unsigned bands. Imagine my surprise when a whole list of unknown bands, including the earliest incarnations of Robin Black and Märvel, filled up my screen offering the opportunity to download a bunch of cool MP3s by some pretty raw, rocking groups most of who are now lost to the buried files of the cyber wasteland. And to think that somehow I thought that my band at the time (my initial reason for being on the site in the first place) was the only real rock and roll band left on the planet. I guess I should have had a bit more faith that other rockers in the world were just laying in wait like myself for the day that we would all convene to rise up against the evil armies of studio pop and vocoder vixens. Well, at least a tad of confidence that somewhere other rockers were at least making some cool tunes.

Thinking back the best I can remember is that what first caught my ear about Märvel had more to do with how catchy their hook-filled tunes were not too far removed from Unmasked era KISS. Just good infectious rock and roll that while dipping into power pop territory steered clear of teeny bopper pop. Funny how listening, I somehow pictured a band that looked more like indie glam trio Marvelous 3 than three guys in suits, wrestling masks, and goatees but even witnessing that years later wasn’t enough to sway me from staying hooked on the songs. Seeing that along the way, I always loved those early lost tracks a bit more than anything else, I stumbled across from the band. I was downright pleasantly jolted when I found out that they were re-releasing their impossible to find 2002 debut EP…well sort of.

The story goes that while in Colorado courtesy of their high school student exchange program, the Swedish trio formed and recorded four songs to be released on an American indie label but before it could happen, the guys jumped plane back home. Despite promises, Märvel were never given the master tapes, which supposedly turned to ash in the 2008 Universal Studios warehouse fire. Now eight albums and a couple EPs later, the band has taken the time to re-record those four tracks to reissue as the new updated Märvellous. Yes, the new version adds those umlauts and without being too cheeky, the final result truly is, Märvellous.

Starting off very much like Gene Simmons‘ gem “Almost Human”, opening track “Amaze-O” has KISS written all over it in a way that bridges the gap between very early KISS and the coolest Demon stuff found on Love Gun especially on the main riff and the lead guitar. You almost forget that the lyrics don’t really make sense but then again, KISS themselves weren’t exactly literary poets. Märvel claim to not have tried to revisit the vibe of the original EP version and yeah, it makes you wonder what the early versions sound like in comparison but once the tune gets deep in, you almost don’t care. It’s just that cool and heck, you don’t even give a crap how close to KISS it sounds. Maybe that’s cause KISS hasn’t sounded this much like KISS in eons.

Sticking to that KISS vibe with a lick of Poison‘s version of Grand Funk‘s “We’re An American Band”, the title track is a fun romp and it’s just as tongue in cheek and pouty and once again armed with a seventies-inspired Ace Frehley guitar solo. Man, it’s no wonder I loved this band the first time I heard ’em on that now lost site all those years ago. If ever a band sucked up the music of those original masked marvels and spit it out in a cool, familiar, yet still awesome way, it’s Märvel and on the reboot of the band’s 2002 debut, they don’t veer very far away. “Public School 75” does give a nod to future Swedish bands I also dig and just goes to show that even the punkiest of rockers from that region have this thing for hooks in even their edgiest rock and roll but even so, you can still hear the KISS influence just not as much. Of all the tunes here, “A Taste of Platinum” (a track the band originally re-recorded for their 2005 debut album) sounds the least KISS-like but does deliver like some rock and roll Paul Stanley could have dropped on his 1978 solo album.

If you dig KISS, you might do yourself well to check out Märvel. Heck, on their 2019 covers album, they even start the whole shebang off with a kicking take on KISS‘ “All For The Glory” from 2009’s Sonic Boom record, so you got to know, these guys love KISS. OK, so it stands to reason right? Similar sound plus donning stage outfits that kind of look like KISS stepped off the photo shoot of Dressed To Kill, got a haircut and tossed on some wrestling masks and hats only it doesn’t make you cringe. If anything, it builds an urge to hear more, then put on an old KISS record, then more Märvel, then more KISS, then Märvel… Heck, this is starting to sound like that very first Marvel Comics Super Special that came out in 1977 with KISS‘ blood spilled into the ink, only this time it’s Märvel spitting out their own KISS-infused blood transformed into some crazy test tube rock and roll baby. Too much you say? “Too over the top Stoney?!?!” Well then, how about I just say it’s “Märvellous.”

Band Members:
The King – guitars and vocals
The Burgher – bass
The Vicar – drums

Märvel‘s “A Taste of Platinum” single: