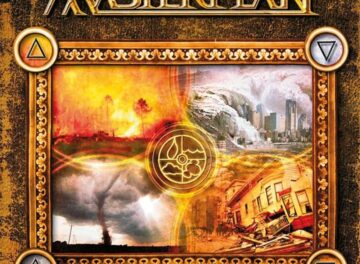 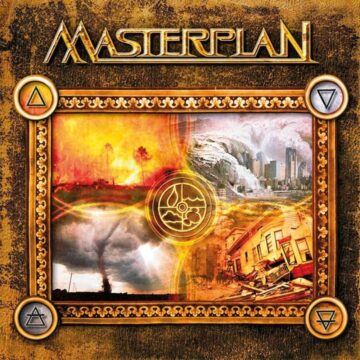 Review:
Today is the 20th anniversary of the release of one of my favorite albums of all-time so it seems fitting to share my thoughts on it with the Sleaze Roxx faithful. I have to say that I stumbled by chance upon Masterplan‘s debut full-length album a few years after its release. Back in the early 2000s, I was mainly listening to my favorite bands from the ’80s and purchasing whatever new music that they might release up to that point. While many ’80s bands had stopped releasing new music by that time, there were a couple that were still consistently putting stuff out such as Dokken, Iron Maiden and Helloween. Given that I had not yet turned in the early 2000s to the internet to discover and re-discover many of my favorite ’80s bands, my main method to find out if a group had released a new album was via my monthly visits to the giant HMV store in downtown Toronto.

It would take me a good 20 minutes to walk from my office located on the infamous “Bay Street” up Yonge Street to the HMV flagship store located at the corner of Yonge and Dundas. At that time, the larger than life Sam The Record Man was there as well but the HMV store was my “go to” place to check out music. HMV‘s top floor on the third level had a huge metal section and I could easily spend one hour browsing the CD “metal” section.  By the time I grabbed lunch and walked back to my office, I had easily wasted two hours of my workday. More time would then be spent at the office checking out the booklets from the various CDs that I had purchased while listening to whatever music that I had purchased. Clearly, those were not my most productive work days for my employer….

I was always a little concerned that I was listening to the same bands over and over during those years but I simply didn’t know which new band was worth checking out. One day, I saw a Masterplan CD on display and noticed that Helloween guitarist Roland Grapow was part of the band line-up. While many — including his former Helloween bandmates who didn’t invite him to their “reunion” about six years ago — might not think of Grapow as a key cog in Helloween‘s history, I knew better. This is a man who played on some of Helloween‘s best albums — I am thinking in particular of Master of The Rings (1994), The Time of The Oath (1996) and The Dark Ride (1999) — and who wrote some of my favorite Helloween songs including “The Chance”, “Step Out of Hell” and “Mr. Ego (Take Me Down).” In any case, I decided to take a chance and purchase Masterplan‘s debut album without hearing any songs from it and that’s probably still the best “blind” purchase of music that I have ever made.

To say that I was blown away would be an understatement. Masterplan‘s self-titled debut full-length album had already been out for a few years so I was pleased to be able to purchase the follow up record Aeronautics (2005) very quickly after. While Aeronautics is a solid album, there is something truly magical about Masterplan‘s debut full-length record. As the story goes, Grapow and his Helloween bandmate Uli Kusch (drums) were fired from Helloween for spending too much time on their side project which turned out to be Masterplan. Listening to Masterplan, you can understand why Grapow and Kusch would have been really excited about their “side project.” Funny enough, although Jorn Lande puts in a career defining performance on the debut album, he was not even the first choice as singers Russell Allen and Michael Kiske were each invited to join the new band but declined to do so. Kiske did contribute his amazing vocal talents on Masterplan‘s debut record as he performed a vocal duet with Lande on the track “Heroes” which is out of this world.

Probably to avoid the issues that creeped up within Helloween where it was quite tough at the end for Grapow to get his songs on the band’s records, the songwriting on Masterplan‘s debut self-titled album is credited to the band as a whole rather than one individual. Grapow was really trying to make Masterplan feel like a team effort. Certainly, the results from the debut album speak volumes on how well that strategy worked — at least at the beginning of the band. Every song on Masterplan is at least really good. Most tracks feel like they take you on an epic journey and the album just gets better and better as you progress through it. As mentioned, Jorn Lande puts in a  career defining performance on the record. I get goose bumps listening to him singing songs such as “Crystal Light.” While many rightfully hail Ronnie James Dio as one of the greatest singers of all-time, I really think that if Jorn could have sung on a couple more albums of the same quality level as Masterplan, he would be on par with the former Black Sabbath frontman. What distinguishes Masterplan from the many Jorn solo albums is simply the quality of the songs. There are so many twists and turns, and the songs build up so magnificently on the Masterplan album.

Masterplan‘s opening track “Spirit Never Die” starts slowly and builds up quite nicely before Jorn proclaims “Never give up! Never give in!” and the song picks up pace wise. It’s hard not to sing along to the chorus section before the song gets a real Helloween feel with the guitar work mid-way through. From then on, the opening track slows down before building back up to a fitting crescendo. Interestingly enough, probably my least favourite track on the album is the first single “Enlighten Me.” It’s probably the most straightforward rocker on the album aside from the slower verses but does not have the epic feel of most of the other tracks. In any case, “Enlighten Me” is a good song, just not a great one. The real epic stuff really starts with the third track “Kind Hearted Light” which kicks off with a heavy keyboard intro (which I usually loath but sounds awesome on this track) before Jorn comes up with a poignant vocal delivery. The song keeps building and gets faster the more it progresses.

Masterplan take it to another level with “Crystal Night” which is a song that I think the sadly departed Ronnie James Dio would have loved to sing. Backed by a killer guitar riff, Jorn takes control of the track and carries it from start to finish. “Soulburn” slows things down quite a bit and goes back and forth from mainly a beautiful ballad to a heavy song (it’s hard not to be screaming “Pathfinder” with Jorn) time after time. It’s very well done. “Heroes” definitely has the biggest Helloween feel with its melodies and of course, none other than Michael Kiske handles half of the lead vocals. It’s probably the simplest song on the record but also one of the best. I have to think that when Helloween got Kiske back in the line-up some six years ago, hearing Jorn and Kiske trading vocals on “Heroes” was the blueprint on what they could potentially pull off with Kiske and Andi Deris singing on a same song. “Heroes” is a brilliant song from start to finish.

Usually, records seem to let up from songs seven to nine but Masterplan keep the pedal down on the accelerator with the infectious melody and easy to sing along “Sail On.” “Into The Light” is probably the song that I noticed the least when listening to Masterplan. It’s a very slow moody rocker but it fits quite nicely on the record. “Crawling From Hell” brings the metal back quickly with the epic and grandiose feel definitely back as well. It’s probably the song that you are most likely to head bang to on Masterplan. “Bleeding Eyes” is a slow moody rocker that is quite enjoyable. Just when you thought that Masterplan had pretty much blown off everything they could on their debut record, the closing track “When Love Comes Close” is a slower epic like track where Jorn‘s vocals once again carries the song. It might well be my favorite song on the album and that’s saying quite a bit.

One day, I am going to complete the Sleaze Roxx’s Top 12 Albums of the Decade (2000-2009) and it’s hard to see Masterplan‘s debut self-titled album not making the Top 12. Yeah, Masterplan is that good. Check out the album if you haven’t already done so. Give it at least a couple of listens so that you can truly absorb all the nuances, twists and turns that are offered on the record.