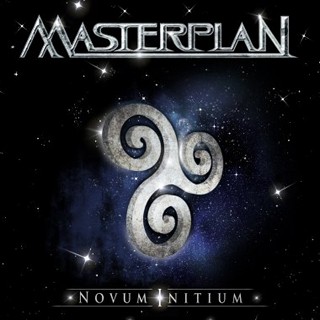 Review:
After two initial absolutely stellar albums, Masterplan has been on well on its way to — unfortunately — tarnish its legacy with an ever revolving door of lead vocalists.

Each of Masterplan‘s last three CDs, including their latest offering Novum Initium, has featured a different frontman. Jorn Lande was the singer on Masterplan‘s first two releases, Masterplan and Aeronautics — did I mention how stellar those two CDs were? I know I did but have to emphasize that once again. Following Lande‘s unfortunate departure, Mike DiMeo took over the helm for the band’s third offering MK II — a disappointing, more keyboard oriented, effort when compared to the first two. Lande was back for Masterplan‘s next album Time To Be Kings, unfortunately that CD, although pretty good, did not recapture the magic from the band’s first two albums. Now Masterplan has Rick Altzi as its latest lead vocalist and also a new rhythm section with bassist Jari Kainulainen and drummer Martin Skaroupka.

Following a futuristic/classical intro, Novum Initium kicks off with one of the album’s best tracks — “The Game”. Altzi sounds like a cross between Lande and DiMeo, and works well with the classic Masterplan sound. Next up is the disc’s first single, “Keep Your Dream Alive”, which is quite heavy on keyboards and a little slower than it needs to be. “Black Night Of Magic” takes you back — in a great way — to the first two Masterplan releases with its intro, faster pace and different tempos between the verses and chorus. Other song highlights for me include “Pray On My Soul” and “Return From Avalon”.

All of Masterplan‘s songs on Novum Initium seem to have some sort of epic feeling to them. One listen to the CD does not do it justice — the more you listen to it, the more that you end up enjoying it and appreciating all of its nuances. As can be expected on any Masterplan release, the musicianship is very good and from hearing Novum Initium, you would think that the band has been playing together for years and years and that this was not the line-up’s first outing together.

At the end of the day, Novum Initium does not recapture the magic of Masterplan‘s first two releases — but it is a solid effort. Not many bands are able to successfully survive three different singers on their last three releases, but after hearing Novum Initium quite a few times I am ready to move on from the Jorn Lande version of Masterplan and accept Rick Altzi as their new lead vocalist.