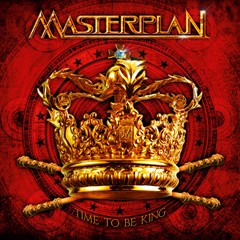 Review:
Jorn Lande is back with Masterplan, and when I first heard that news I was very excited to hear what the end result of the reunion would be. I’ve been a Jorn Lande disciple since I discovered his Out To Every Nation album back in 2004. Longtime fans are thrilled, and welcomed Lande back into the fold as Masterplan MK II (with vocalist Mike DiMeo) was met with mixed reviews by fans and critics alike.

This brings us to the new album Time To Be King — it’s back to basics with Masterplan, as you get well crafted melodic power metal that could appeal to AOR and hard rock fans alike. There were no risks taken on Time To Be King, which would have been a nice change of pace. Instead Jorn and the guys stick to their guns and do what they do best — and that is providing the listener with epic, powerful and soulful vocals backed by a dynamic rhythm section and unsurpassed guitar riffs and solos. Let’s not forget the brilliant string and keyboard arrangements that add that extra accent to the band’s trademark sound. The standout tracks on Time To Be King are “Fiddle Of Time”, “Time To Be King”, “Lonely Winds Of War” and “Far From The End Of The World”.

If you’re into power metal there is no doubt that this is on your want list. Time To Be King shouldn’t disappoint, but it would have been great to hear Masterplan stretch the boundaries of the subgenre.