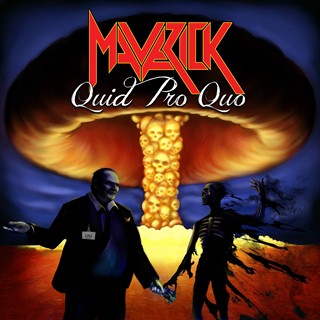 Review:
In two short years, Maverick have gone from independently releasing a mini-EP to signing with an established record label to deliver their full-length debut. According to the dictionary, Quid Pro Quo means ‘something given or received for something else’ — in this case the young Irish rockers have given a fine collection of music, but aside from the admiration of a limited fan base, I’m not sure what they can expect in return.

We all love our ’80s metal — the days when hair was teased to the stratosphere, men raided the wardrobes and cosmetic cases of the nearest female, and the accompanying music that was outrageously overblown — and Maverick have that sound molded to perfection while steering clear of the ridiculous image. Not the fastest or heaviest band in the land, Maverick succeeds by lacing their songs with memorable guitar hooks and over-the-top choruses that are bursting at the seams with harmony. One thing Quid Pro Quo does suffer from is a case of ‘sameness’, meaning there are few tempo changes or variances between the songs — but because there isn’t a bad track on the entire disc, you can excuse the lack of deviation.

After a short intro, “Snakeskin Sinner” officially kicks the proceedings off and really sets the tone of the entire album as vocalist David Balfour uses a gruff delivery during the verses before smoothing his approach during the harmonic choruses. The lead-off single “Paint By Numbers” is more straight-forward ’80s hard rock, but I’ll be damned if I can think of a group from the past that Maverick closely resembles (I suppose that is a good thing) — as far as current groups go however, think of a rough around the edges version of Crazy Lixx. “In Our Blood” succeeds because of the furious guitar playing that opens the song and reappears throughout, not unlike following tracks such as “Electric” and “Side By Side”. My favorites show themselves during the latter half of the album in the form of “Shackled” and “Took The Night”, two tracks that explode with melody yet also contain just the right amount of crunchiness so they don’t fall into pussified AOR territory.

Quid Pro Quo is a really enjoyable release for lovers of ’80s hard rock — and there are still many of us left. I’m not so sure Maverick would have been household names even when this genre of music experienced its commercial peak, but they certainly would have found themselves perched alongside the bands that many now consider underrated. You have to admit Maverick have come a long way in two short years and are able to compose melodic rock staples that elude even the most seasoned veterans.