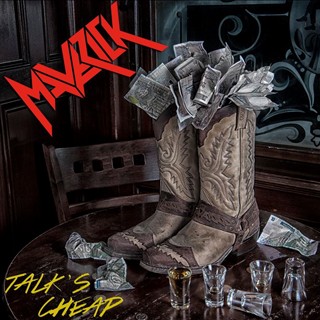 Review:
Rock ‘n’ roll isn’t rocket science — when done correctly it is simply a form of music that grabs you by the balls with attitude and a healthy dose of aggression. The young Irish rockers known as Maverick have obviously done their homework as they keep things simple and straight-forward on their debut EP Talk’s Cheap.

Opening with “Maverick”, the band deliver a hard hitting number that will undoubtedly kick off, or close, their live set for years to come. It’s the type of song that sounds as if it was created in another era, that being the hard rocking ’80s, with its furiously driving guitars and determination to drill home the band’s moniker. During “Cat Got Your Tongue” singer David Balfour ventures into Sebastian Bach territory, when he ruled the airwaves with Skid Row, while “Easy Come’ Easy Go” could be compared to a much heavier rendition of Hardline — and both tracks are dripping with sexual overtones. However it is “Hellfire & Brimstone” that ups the ante as it begs to be played at ear-shattering volumes and perfectly captures a sound and feel that us aging rock fans all grew up with. In fact, if you close your eyes and drift back to high-school you can easily picture this song being cranked alongside the metal giants of the late ’80s and early ’90s.

Talk is indeed cheap, which is why Maverick have lived up to the old adage of ‘let the music do the talking’. They may not be breaking new ground on this five-song EP, but when the songs contain this much energy and attitude who cares? I know people often bitch that today’s music is completely forgettable, but with a little searching you can uncover gems such as Maverick and relive hard rock’s glory days. Now get off your ass and buy this EP because the word ‘cheap’ doesn’t only apply to the album’s title as Maverick are offering it for a very reasonable price — and I’m hoping with enough interest we can squeeze a full-length out of these guys.