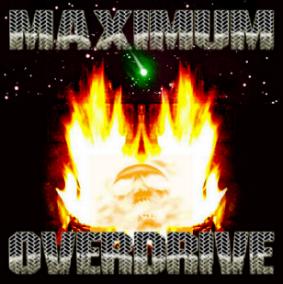 Review:
With a name like Maximum Overdrive I was expecting another AC/DC clone, but what I got instead is a thrash type band that isn’t sure if they want to play thrash or not! One moment these North Carolina head-bangers recreate Ride The Lightning era Metallica, and the next they venture into the traditional metal direction of Iron Maiden. Back in high-school both those genres were number one, but the thrash genre seemed to eat itself from within. There were only so many times you could hear the same crunch over and over, and only so fast a human could play. Needless to say I lost interest and moved on.

This may seem ridiculous, but as much as vocalist Ronnie Lamanna sounds like James Hetfield on the opening track he sounds just as much like Marq Torien on “Skullbasher”! I’m not making this shit up! The rest of the CD however he falls somewhere in the middle, and often times comes across like Paul Di’anno – but the music itself remains fairly constant while sticking with the chug-a-chug riffs of thrash while implementing some power metal and even grunge moments.

The band does mix things up a touch with different sounds, like the revving of a motorcycle, the loading of a gun, insane laughing and George W. Bush sound-bites. But those minor inclusions don’t change the fact that my tastes have changed (for the better or worse?). Sure this CD brings back old memories, but these days if I want to remember the old times I want the soundtrack to be filled with sleazy rock.

There was a time when I would have licked this up like Ron Jeremy with the latest Vivid girl, but that seems like an eternity ago now. Of course I can’t help but liking the Black Sabbath sludge playing on “Feedin’ The Devil”, but this type of music doesn’t really excite me anymore. Maximum Overdrive do what they do well enough, but I’m no longer the man to give an album like this a fair shake. If you are still into the whole thrash metal shtick or just need a trip down memory lane head over to www.maximum-overdrive.com, and if not – just skip this one.