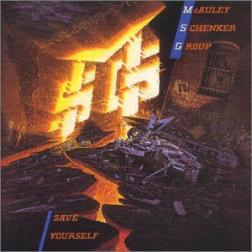 Review:
First off, I want to say that this album rocks! Former UFO member Michael Schenker (younger brother to Rudolf of the Scorpions) really rips on the guitar. Songs like “Anytime” (a minor hit at #69 on the charts), “Get Down To Bizness” and “I Am Your Radio” really jam! Vocalist Robin McAuley has an incredible gravelly delivery, and sounds great (despite having one of the worst hairdos in 80’s rock history!).

It is hard to understand why MSG didn’t get more recognition, because they definitely deserved it. The 2000 Japanese reissue of this album has three extra tracks, which are a nice edition. I give Save Yourself two thumbs up!