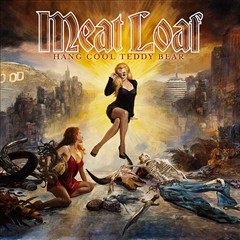 Review:
Meat Loaf hasn’t really had a consistently solid album since the legendary Bat Out Of Hell. There have been great songs on everything since, but the albums as a whole have been a mish mash of highs and lows. His latest CD, Hang Cool Teddy Bear, even with its long list of guests, seems to be another hit and miss affair.

“Peace On Earth” starts things off with the usual theatrical aplomb that is Meat Loaf‘s calling card, so things seem promising. Then he starts sliding downwards with “Los Angeloser” in which the first line has Meat Loaf declaring, ‘Yo baby I wrote you this poem’, and the whole song is dotted with this kind of talky sing-song gimmick which just sounds silly. Up we go again with “If I Can’t Have You” which is pretty good — Meat Loaf has always had a knack for getting the best female powerhouse vocalists to compliment him and this time it is Kara DioGuardi.

Even with guitar appearances from Brian May and Steve Vai, “Love Is Not Real/Next Time You Stab Me In The Back” can’t be saved from being a self-indulgent drawn out bore, followed by some rap-rock Beastie Boys imitation on “Like A Rose”. In “California Isn’t Big Enough (Hey There Girl)” Meat Loaf sings, ‘You’re so cute I wanna smash your face’, and just when I thought the lyrics couldn’t get any more nonsensical he comes out with the gem, ‘I can barely fit my dick in my pants’. About now I’m beginning to think that the best thing about Hang Cool Teddy Bear is the cover art.
Things bounce back with a familiar and recognizable Meat-esque sounding “Lets Be In Love”, featuring the wonderful voice of Patti Russo, and the Jon Bon Jovi and Desmond Child co-penned “Elvis In Vegas” is a pleasant enough closer.

I don’t know if Meat Loaf is trying to be hip or is just exploring a new direction with some of these absurd lyrics — or is it some midlife crisis? That might to be the problem with this disc as well, it doesn’t seem to know what it wants to be. Some stupid lyrics aside, the songs are a disappointment too, although to give Meat Loaf some credit he can still belt it out vocally.

I’d like to be able to say ‘two out of three ain’t bad’, but in the case of Hang Cool Teddy Bear it’s more 4 out of 13 ain’t good enough. There is an ingredient missing in this ‘meatloaf’, and I reckon it’s Jim Steinman.