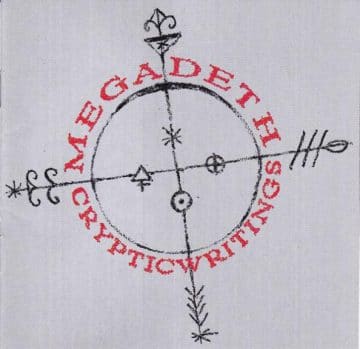 Review:
Megadeth frontman Dave Mustaine, the polarizing frontman and guitarist, was hell bent on getting out from behind Metallica’s shadow, which loomed over him like a dark cloud. Having achieved near Metallica status with Countdown To Extinction and the less thrashy Youthanasia, it was unlikely that Megadave would unleash an all out thrash metal assault a la Rust In Peace.

Cryptic Writings was released in 1997, 20 years ago this year. There’s ‘mixed’ emotions with this one. Megadeth continued down the ‘hard rock’ sound which is akin to it’s predecessor Youthanasia. Sure, there’s four thrash metal tracks — “Mastermind,” “She-Wolf,” “FFF” and “The Disintegrators” — but aside from the aforementioned tracks, it’s pure contemporary rock. On Cryptic Writings, Megadeth enlisted Dan Huff (Giant) to produce which accounts for the ‘radio friendly’ approach and the band straying further away from its thrash metal roots. Cryptic Writings did produce the hits “Trust,” “Use The Man” and “She-Wolf” but by this point, the fanbase was disjointed due the band’s schizophrenic musical nature. Cryptic Writings by no means is the definitive Megadeth album. That distinction goes to either Peace Sells…But Who’s Buying (1986) or Rust In Peace (1990) or even Dystopia (2016) which was a true return to form for Megadeth. Cryptic Writings is mundane — no more, no less.

It’s really unfortunate that Mustaine had David Ellefson (bass), the late Nick Menza (drums) and guitar wizard Marty Friedman on lead guitars and this is the best he could do. In 2004, Capitol Records reissued, remastered and remixed versions of the Megadeth Capitol back catalog with bonus cuts. If you ever wanted to hear Mustaine sing “Trust” in Spanish, you can find it there. The worst was yet to come however as the band pressed forward with an even more commercial direction with the following effort Risk.