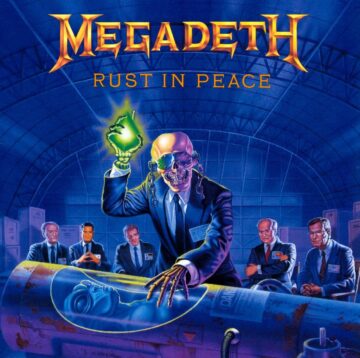 Review by Ruben Mosqueda:
Megadeth have always occupied a special place in my heart. I discovered Megadeth before I discovered Metallica. I bought Peace Sells… But Who’s Buying? before I picked up Master Of Puppets. In the ’80s, there was this sort of divisiveness, you were either in the Megadeth camp or you were in the Metallica camp. It was stupid, silly and ridiculous but very real. In fact, I recall going to a mall when I was 13 years old and I was wearing a denim jacket with the huge ‘classic’ logo sewn on it (by my mother of course). I didn’t learn to sew until a couple years later. The patch caught the attention of some older ‘rivetheads’ that were in the Metallica camp and they let me know it.

While, I’m not a huge fan of the Killing Is My Business…And Business Is Good! album, I absolutely loved what came afterward. Peace Sells… But Who’s Buying? was excellent and while So Far, So Good…So What! was a little uneven, even that was good enough for me to blow through three-four copies of the cassette before I upgraded to a glorious copy on CD. One thing about Megadeth, it was frontman / guitarist Dave Mustaine’s vehicle back in the day with the line-ups evolving and it continues to this day. The mainstay back in the day was David Ellefson on bass. He too eventually left for a few years, but he made his way back. In 1990, Megadeth released a new album, Rust In Peace. It was produced by Mike Clink who was best known at the time for his work with Guns N Roses. And as you know, it featured a new line-up, which is no question the most beloved line-up with of course Mustaine, Ellefson, Marty Friedman on guitar, who was one of the many that surfaced from the Mike Varney’s stable at Shrapnel Records, and Nick Menza on drums, who we would later find out was one of the best drummers Megadeth have ever had.

Rust In Peace is like a greatest hits album. It’s a thrash metal album that has gone on to feature fan favorites that are rotated in and out of the set over the years. “Holy Wars…The Punishment Due” is a masterpiece. It’s a thrash metal aerial assault that opened the album, and a song which I feared at first listen would result in Mustaine and Co. blowing their collecting musical loads on that one track. As I found, it was not the case as they launched right into “Hangar 18” about the UFOs [allegedly] in Area 51 [inspired by Nick Menza’s love of all things extraterrestrial]. “Take No Prisoners” was an aggro, testosterone fuelled slab of metal. I also adore “Five Magics” but Mustaine has moved on from that due to its ‘occult’ subject matter, I believe the last tour that was played on was for the Rust In Peace 20th Anniversary Tour [2010] with Slayer and Testament supporting, and which was titled American Carnage. Megadeth played the album top to bottom, and while it was not THE line-up that played on the record, the execution was as close as you could get with perfection, as Mustaine’s vocal can be spotty at best. After the first leg of American Carnage, Megadeth released Rust In Peace – Live, which was recorded early on, during the first part of the first leg. What a souvenir.

Megadeth toured their asses off during their Rust In Peace promotional cycle with solo shows; The Clash of The Titans Tour with Anthrax, Slayer and Alice In Chains in North America; then the European Clash of The Titans Tour with Suicidal Tendencies opening; and supporting Judas Priest on the Painkiller Tour in the middle slot with Testament opening the show. Road warriors. I saw them all and those performances sound as magical as it sounds. Whether you like any of the aforementioned hits, “Poison Was The Cure,” “Lucrecia,” “Tornado of Souls,” or “Rust In Peace…Polaris,” you can’t go wrong with this album. It marked Dave Mustaine’s peak and was a landmark album that helped shape thrash metal into what it is today. One thing to note, if you can at all avoid the 2004 remix of this or any of the Megadeth albums that were remixed by MegaDave, do it. They’ve lost a little something and there were portions that were recut, which loses the initial vibe of the original recordings. Rust In Peace was just accessible enough to bring in some of the glam rock listeners in for a listen. I mean you are reading this after all.

Review by John Lewis:
Megadeth have long been considered “State of the Art Speed Metal” – nowhere did they earn this title more than on their fourth album, Rust in Peace, released in 1990. This was an album that emerged from a very tumultuous period from this very tumultuous band.

Core members, founder Dave Mustaine and David (Jr.) Ellefson, had just fired their lead guitarist and drummer. Into the fold came their drum tech Nick Menza and indie guitar sensation Marty Friedman. Thus was born a relatively short-lived, but all-time classic, metal line-up. As an aside, but important nonetheless, the band members were experiencing a very dark narcotic phase in their career, which did not adversely hamper the resulting record. Band leader and founder Mustaine enlisted producer Mike Clink, due to his masterful work behind the boards for Guns N’ Roses’ Appetite For Destruction and UFO’s Strangers In The Night, both era-defining records with incredible guitar tones. So… off to the races.

From the lead-off track, “Holy Wars…The Punishment Due”, it is obvious that Megadeth have raised their game to a whole new level. Sparkling, penetrating mix… as a matter of fact, when my own band went into the studio to record a CD, we referenced this album as a benchmark. The highlights are many. My personal faves are a few ‘deep cuts’ – “Five Magics”, “Tornado of Souls”, and album closer “Rust in Peace…Polaris.” It is absolutely incredible how the band stuff each song with an overload of terrific metal riffs. They were at their writing peak on this release.

I have a fantastic personal memory of Megadeth from this era. To support the album in North America, the band supported Judas Priest, with Testament as the opening act. As bands do, on an off night from the tour, Megadeth were booked into a club, in this case Ottawa’s legendary Barrymore’s on October 21st 1990. A very hot fall night in the Capital, and one of my top three all-time shows. To say that the band was absolutely on fire would be an understatement. The club was obviously packed, and Megadeth kicked off with an awesome one-two punch of “Wake Up Dead” and “The Conjuring”, the latter no longer performed due to Mustaine’s religious beliefs. It was cool also to see Testament, who didn’t perform but whose members were wandering around the club. Memories!!!

Rust In Peace has received a remix and bonus edition from 2004, with some demo tracks added. Those of a more literary bent will also know that Dave Mustaine recently published an autobiography with this album as its subject.

This is an album that has to have a place in your collection. Put it on, crank it to 11, and raise a pint to a defining moment in metal history.