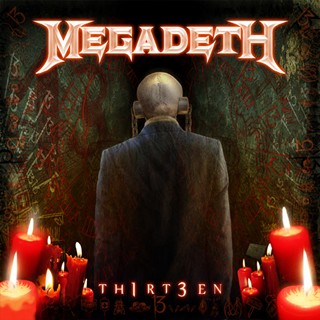 Review:
When 30 Rock character Tracy Jordan really loves something he says, “I want to take it behind the middle school and get it pregnant.” The impudent character’s phrasing is definitely juvenile, but after spending a week listening to the new Megadeth album Th1rt3en nonstop, I totally understand where he’s coming from.

Th1rt3en is Megadeth‘s finest album since 1994’s underrated Youthanasia. Aside from 1999’s Risk and 2001’s The World Needs A Hero, Megadeth has consistently released quality albums like The System Has Failed and the virtuosic Endgame. However, Th1rt3en marks a return to the masterpiece territory Megadeth so flawlessly exuded in the early ’90s with the trifecta of Rust In Peace, Countdown To Extinction and Youthanasia.

What makes Th1rt3en so awesomely appealing? It’s not quite the 100% pure thrash metal of Rust In Peace nor the radio friendly nature of Cryptic Writings, instead it rides the fence between the two extremes, giving the album a Countdown To Extinction vibe. Megadeth was able to remain as heavy as ever (unlike Metallica‘s ‘Black’ album) while simultaneously reaching mainstream audiences thanks to popular songs like “Sweating Bullets” and “Symphony Of Destruction,” and you hear that similarity in new songs “Public Enemy No. 1” and “Whose Life (Is It Anyways?)” — two new instant classics.

Megadeth‘s thirteenth studio album marks the overdue return of original bassist Dave Ellefson, and together the two Dave‘s are up to their old tricks again. Rounded out by guitar wizard Chris Broderick and stalwart drummer Shawn Drover, the current Megadeth is the most technically proficient line-up since the golden era of Marty Friedman, Nick Menza and the ‘Dave’ duo.

Th1rt3en is the type of album that with each new listen, you will have a new favorite track. Whether it’s “Never Dead’s” little drummer boy intro that builds into a ferocious thrasher, “We The People’s” demonic-sounding snarl reminiscent to portions of “Rust In Peace… Polaris,” the exceptional changeup in “Fast Lane” or the ominous “Deadly Nightshade” — there’s no shortage of standouts.

Many fans have been complaining that Th1rt3en doesn’t have enough new music — “Black Swan”, “New World Order” and “Millennium Of The Blind” all were previously released as bonus tracks/demos, but never surfaced as official songs on any album (Dave Mustaine, being the perfectionist he is, did not feel they were ready until now). I understand the grievance, and at first also felt a bit cheated, however I have to point out that a normal album is roughly ten songs, but Th1rt3en has thirteen songs… so I just look at the revised oldies as an added bonus. Plus, “New World Order” is just too phenomenal of a track never to have made it on an actual studio release. It’s about time the unique head-banger is finally getting the credit it so highly deserves.

Mustaine has expressed interest in venturing into new projects (including making music with his former Metallica bandmates Lars Ulrich and James Hetfield) and there are some clues on Th1rt3en that this could possibly be Megadeth‘s final album. For instance the album cover features the backside of iconic mascot Vic Rattlehead, is this meant to symbolize Mustaine walking away from Megadeth? Flip the album over and Vic is shown in a coffin — one could easily interpret this as the death of Megadeth. The most obvious suspicion is in the final track “13”, which summarizes Megadeth‘s entire career, “Thirteen times I went to the well, to draw my thoughts, I’ll gather and tell… like a severed arm washed up on the shore, I just don’t think I can give anymore.”

Though Megadeth‘s contract with current label Roadrunner is over (not that they would have any problem finding a new label), I think I am reading too much into these inklings, especially since Mustaine just told Billboard, “I’m very excited, very optimistic about the future.” If this is it for Megadeth, the band certainly went out rejuvenated and with a memorable farewell.