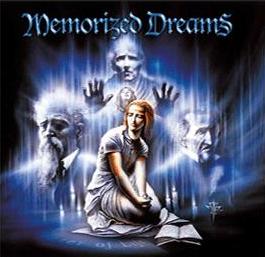 Review:
I’ve never been a huge power metal fan, mainly because the majority of vocalists in this genre sound like they have recently caught their nuts in a meat grinder. That may be why I enjoyed Memorized Dreams‘ debut album. There is no screeching, squealing or any of that annoying high-pitched wailing. In fact vocalist Terje Haroy reminds me of Armored Saint‘s John Bush on several occasions.

What did scare me upon first sight of this album though was the fact that the group included two synth players! It’s common to see two guitarists, perhaps two drummers (southern rock bands seem to specialize in that), but two synth players in a metal band? Ironically the synth/piano is very rarely put to the forefront and are used to beef up the sound as opposed to being the spotlight. “Cardinal Sin” and “Revealing Paradise” are majestic numbers that gallop from start to finish, with the former including some interesting synth sounds. But it is “Haloes And Wings” that is the groups shining moment. Haroy is flawless on this tune and it includes killer guitar licks and some interesting drum patterns.

Luca Turilli‘s Olaf Hayer sings leads on the piano based ballad “Sea Of Oblivion”. I will try to forgive the horrendous “Crimson Dream”, not a great way to end an otherwise pleasant album. I enjoyed Theater Of Life, but not being a power metal fanatic I have no idea if the purists will accept this release or not. All I can do is send you to www.memorized-dreams.tk and www.soundriot.net to judge for yourself.