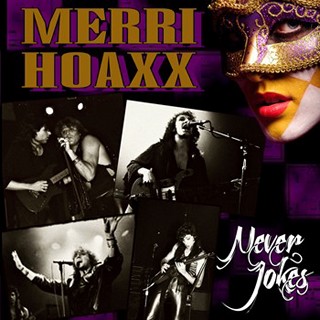 Review:
The long awaited Merri Hoaxx album Never Jokes brings Cats In Boots vocalist Joel Ellis back into the limelight, as these tracks predate his late ’80s America meets Japan project. Recorded in 1986, you might wonder why it has taken over 20 years for this album to be presented to the world. You might wonder, if only you aren’t too distracted by the poor quality.

Joel Ellis sounds shaky and all over the place during the opener “Talkin’ To Myself”, and while the hooks are more stable but far from memorable, the song is just too loose in structure. “The Last Days Of Autumn” has one of the better guitar solos from Denny Holan, but you might want to skip the disjointed first couple of minutes. There are some great backing vocals shouting out during “Let It Go” and Ellis let’s off some steam as Holan drives through the dodgy mix with a great guitar tone. A mellower side of Merri Hoaxx is shown during “I Was Only Joking”, and the thinner mix during the verses lets the vocals and guitars sing out better.

“Just For Ol’ Times Sake” is one of the stronger tracks on Never Jokes, as it is both glammy and ballsy. “Radio” lifts the pace a little, and with it, comes a verse with the balls and guts you would expect from an underground glam band — despite the poor recording quality, Ellis‘ voice is still the guiding light amidst the rather rough guitar work. I’m not sure whether it’s the local zoo or Ellis himself opening “Nothin’ To Say”, but the rhythm section takes the driver’s seat and they do it with style — which makes realize one thing this album could use more of is a heavier bass and drum layer to cement the riffs. “Merri Go Round Your Nightmare” has an effective haunting touch, but the power to really enrapture you just isn’t there. Closing track “I’m Ready” offers nothing that you haven’t heard and rounds off a pretty under-average album.

There’s a certain charm about the rawness of Never Jokes‘ dated recordings and it adds to the whole underground feel that is sometimes lost in newer, overly-polished albums — but if you’re not a fan of the dingier sounds then it’s not for you. But then again, this was recorded back in 1986 and the mix just doesn’t let the best components of the band shine, or indeed, compliments the weaker parts. For the best of Joel Ellis, I’d direct you to Cats In Boots.