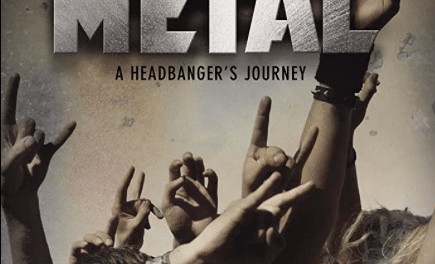 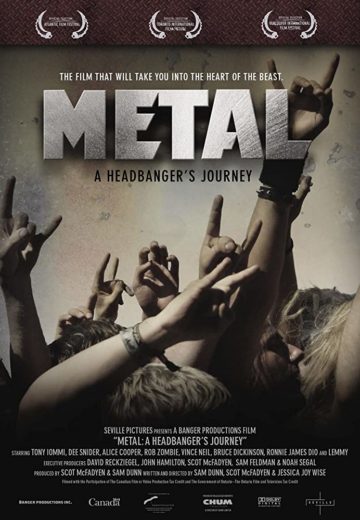 Review:
Canadian metalhead and university accredited anthropologist Sam Dunn found the funding and had the drive to consider the life of metal fans under the objective lens of science. In 2005, Dunn and his partner Scot McFadyen wrote, produced, and created Metal: A Headbanger’s Journey.  It premiered at the Toronto International Film Festival (TIFF) in 2005, and was subsequently released on video a few months later in 2006.

Dunn, a metal fan himself, is seeking both the roots of metal and its effects on society today… well, 2005 up until to be specific. The 90 minute documentary opens with Geddy Lee (Rush) discussing how Blue Cheer was one of the first real metal bands, and Jon Kay (Steppenwolf) claiming that Canadian Mars Bonfire was the first to describe heavy metal in the song “Born To Be Wild.” An interview with Lemmy quotes him as attributing the title to Deep Purple. Guys from Cannibal Corpse, Lamb of God, and Rob Zombie (all interviewed by Dunn), point to Black Sabbath.

Anthropologist Sam Dunn created a theory of metal bands going back to Cream, Jimi Hendrix, The Stooges, Deep Purple, and more. Then he developed a whole chart of who begat whom, influences, new creations, and tweaks on the metal genealogy. I think he’s more right than wrong with this chart. The thing that’s so amazing about Dunn’s work here is that not only are his theories sound, but he backs them up with interviews from people who are in the know. A mere eight minutes into the movie, and I’ve already seen clips from six bands, and now heading into a sit down with Tony Iommi. Moving on, Dunn asks rhetorically, ‘What makes metal sound evil?’ Alex Webster from Cannibal Corpse says it’s the “The blues scale, the flat fifth. It’s the devil’s note.”

All of the above is just a precursor to what the documentary is about. The number of people Dunn was able to interview, his Wacken experiences, traveling everywhere to see bands, and meeting his heroes — I’m not sure how some kid from Victoria, British Columbia, Canada was ultimately able to create such an immense story, but hell it works. You hear how Van Halen works off Bach’s Classical music (“Eruption”) or how Iommi or Lee were influenced by American blues musicians of the ’30s.  Meanwhile, it’s interesting to hear from “Piggy” D’Amour, Corey Taylor or Lemmy about how their upbringing and hometowns led them to heavier, uglier music.

Metal: A Headbanger’s Journey sees Dunn talking to many bands so far about their experiences and influences. Dunn then moves on to the fans. An interview with a young lady in Quebec, for example where she states, “I’m 13 years old, grew up in a small town where everyone likes Shania Twain. People say what happened to you, was it Satan? I say ya, maybe it was, fuck you.” Or a 34 year old retired US Marine who is a die hard Pantera fan. “Metal has been there for a lot of dark times in my life…”  With these interviews and more, Sam Dunn’s point is that metal is more than just music. It has become identity. It has become part of a mental health plan for many people. I tend to agree.

As he moves on, Dunn and his entourage hit Wacken Open Air, lacking credentials or backstage access. Of course, it’s a festival, so he eventually gets behind the gates, and lots of craziness has been recorded. The point is — a massive metal fest not seen anywhere else. Dunn gets some great interviews worth watching. I won’t get into it, but he also spent some time interviewing Norwegian black metal band Mayhem. As Dunn says “Warning, this interview gets a little weird.” Dunn then goes on to talk about the censorship issue in the ’80s… including the PMRC and how Dee Snider (Twisted Sister) addressed the Congressional Hearing in 1984.  Dunn then goes on to cover how metal is male dominated, and not particularly focused on the female fans. Well, that’s pretty much correct, based on the interviews and what is out there in the MTV universe.

Fifty minutes in, Metal: A Headbanger’s Journey brings me to my element by visiting the L.A. scene. Interviewing Vince Neil about makeup and wearing frilly stuff, or how there were “Guys on the strip who wanted to fuck the chicks in Poison.”  There’s a lot of talk (that we all know of) of hair bands who were gender-bending and playing the scene for either on-stage persona or groupie attraction. Metal: A Headbanger’s Journey tries to balance the equation by interviewing Kim McAuliffe and Jackie Chambers from Girlschool, Doro Pech, and Morgan Lander and Mercedes Lander from Canadian band Kittie. They all speak of hardships as women trying to tour in a male environment, which is quite interesting and a bit depressing. Lemmy’s comments about inviting Girlschool on the road are wild.

Dunn then moves on to the topic of religion and Satanism, and is clearly awestruck being able to sit down with Ronnie James Dio in his gothic mansion. He then includes interviews from Tony Iommi, Alice Cooper, Kerry King, and others about how the non Christian motif is prevalent in metal, and exactly why. Based on the western metal bands and their idea of dark, evil, or satanic metal, Dunn visits the home of black metal — Norway.  A place where “Punk Rock meets Wagner, meets Alice Cooper” as he describes. There have been arson, assaults, and even murders linked to Norwegian black metal. Dunn interviews both a church minister and Jorn, the black metal musician responsible for the fire. There’s also a good interview with Gaahl of Gorgoroth to provide further insight into that country’s black metal scene. I’m not going to editorialize here — watch the doc and decide for yourself.

Ultimately, Dunn works his way back to how metal moves beyond the societal projection of evil, anger, and anti-social. As Sam Dunn puts it, “Since I was 12 years old, I’ve had to defend my love for heavy metal against those who say it’s a less valid form of music. My answer now is that you either feel it or you don’t. If metal doesn’t give you that overwhelming surge of power, makes the hair stand up on the back of your neck, you might never get it. And you know what, that’s OK because judging by the metalheads around me, we’re doing just fine without you.”

This documentary is something that every metalhead needs to see, even 15 years after the fact. Dunn goes to all the hotspots and gives us feedback that only a self-professed banger could. I’m amazed that someone without any real credentials (other than long hair and genre knowledge) was able to get such intimate access to the great metal heroes. I should mention that Sam Dunn also created the wonderful doc Global Metal in 2008, going around the world and talking about the trials, tribulations, and successes of metal bands from Indonesia, China, Israel, and other countries you wouldn’t expect. Dunn also runs BangerTV on YouTube.  I’m loving their Shredders of Metal series!

Trailer for Metal: A Headbanger’s Journey: