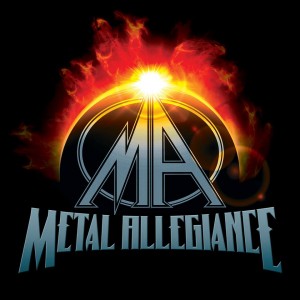 Review:
Mike Portnoy is a man with many hats. As one of the founding members of Dream Theatre, this man has been involved with many projects since his exit from the band. Portnoy has helped Avenged Sevenfold with their Nightmare album after the sudden and tragic death of The Rev, he was in Adrenaline Mob, started The Winery Dogs with Richie Kotzen and Billy Sheehan, and now his new project Metal Allegiance. Of all the projects that he has been a part of, none of them were in the thrash metal genre. This was one genre that Portnoy had to sink his teeth into. With Metal Allegiance principal partner Mark Menghi at the helm, Portnoy rounded up a group of outstanding musicians to help. He recruited Alex Skolnick to handle most of the guitar duties and Dave Ellefson on the bass. The vocals are handled by many different vocalists from the thrash/metal scene. Most of the tracks also have additional bass and guitar appearances to give each track a thicker sound.

The idea of Metal Allegiance started in 2011 to get a lot of musicians together for a great live experience. Although the line-up has changed a few times from the initiation, the passion has not changed. These musicians have a love and passion for the music and they want to make sure the fans hear and experience what Metal Allegiance is all about.

Portnoy, Ellefson, and Skolnick have been around for a long time and some people think they are the best musicians with the instruments that they play. I will admit, I was really excited to hear what these three talented musicians could come up with. I will tell you, they do not disappoint. Any fan of these musicians previous works, will enjoy what they have put together.

Metal Allegiance kicks off with a track that features D. Randall Blythe from Lamb of God with his deep growl and screaming voice. It is a little reminiscent of his main band, but it is a great start for this album. D. Randall Blythe adds, “When Lamb Of God asked Alex Skolnick to rip a guest solo on ‘Ashes of the Wake’, it was a big deal to us to have one of the legends of our scene play on our record. Much to my amazement, years later he returned the request, and it’s an even bigger deal to me to be asked on a peer level to contribute to a project with so many stellar players. I was honored to be chosen – ‘Gift Of Pain’ rips! Play it LOUD!”

“Dying Song” is the only track not to feature Ellefson on bass. Philip H. Anselmo handles the vocals on this Black Sabbathy type song. This song will take you to a few different places, but it is a great musical journey. The most interesting pairing on this album is “Wait Until Tomorrow.” Dug Pinnick from Kings X and Jamey Jasta from Hatebreen share the vocal assault. It is a great mix of some blues, while Pinnick is singing, and then a hard hitting chorus that has Jasta screaming his heart out. While I was listening to this album, I thought to myself what an instrumental song would sound like with these three powerhouses writing the music. Then “Triangulum (I. Creation II. Evolution III. Destruction)” came on and I was loving every second of it. Guests on this song that helped with lead guitars are: Misha Mansoor, Ben Weinman, Phil Demmel, Matthew K. Heafy, Ron “Bumblefood” Thal, and to much of my surprise Charlie Benante (drummer for Anthrax) who I did not know played the guitar. He also guests on “Pledge of Allegiance”.

I strongly recommend picking up the digipak edition of this album. The digipak has one extra track (and a 45 minute documentary) that is an all-star tribute to the late and great Ronnie James Dio, with a cover of “We Rock.” Guests’ vocals on this track consist of: Mark Osegueda, Chris Jericho, Tim “Ripper” Owens, Alissa White-Glutz, Chuck Billy and Steve “Zetro” Souza. Additional lead guitars are handled by Andreas Kisser, Phil Demmel and Gary Holt. This cover is done very well and is a great end to a fantastic album. I know a full on worldwide tour will probably never happen, but I am pleased that they still released an album of this magnitude.