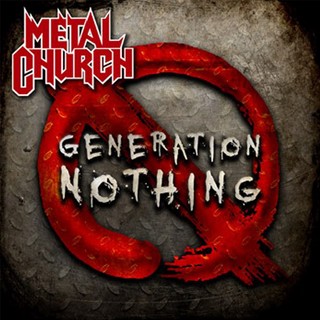 Review:
I’ve heard Metal Church called a ‘legendary’ thrash metal band — in Seattle, Washington and the Northwest perhaps they were. Don’t get me wrong, Metal Church‘s first two mid-’80s records Metal Church and ‘The Dark’, with David Wayne on vocals, are metal perfection. The fact that they followed those releases with Blessing In Disguise and The Human Factor, with (then) new singer Mike Howe, is nothing short of amazing.

Since Howe‘s departure when the band originally folded in 1994 Metal Church‘s line-up has been unstable at best. This instability accounts for the band’s less than spectacular outings. The man holding the band together is guitarist Kurdt Vanderhoof who has finally stabilized the line-up throughout the course of the past couple recordings.

Vanderhoof and company have returned with a new album titled Generation Nothing — their tenth full-length studio album. Unfortunately the music that was written and recorded is that of a band stuck in 1984 — which would be fine if the music were up to snuff like the aforementioned albums. Vanderhoof‘s riffs are massive but the songs themselves don’t really take off and the lyrical content is cliche, passe and downright ridiculous at times. Singer Ronny Munroe has one hell of a voice but I don’t believe that he’s all in as far as what he’s singing — I just don’t. It’s like watching the space shuttle launch only to implode before making it out of the atmosphere.

There’s a lot of potential on Generation Nothing but it just doesn’t match Metal Church‘s glory years — I suppose it is a good reason to get on the road for another nostalgia club tour.