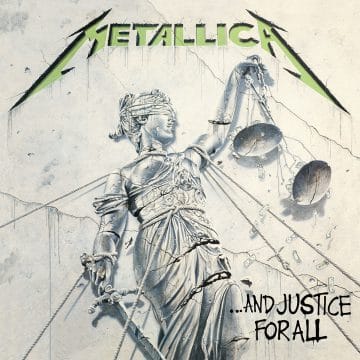 METALLICA
…AND JUSTICE FOR ALL
Released August 25, 1988 (Elektra). Remastered on September 10, 2018 (Rhino/Blackened Recordings)

Reviewed by John Lewis:
On August 25 1988, Metallica released their fourth album, …And Justice For All, instantly notable for being their first with new bassist Jason Newsted who replaced the deceased Cliff Burton. The album remains a classic in the Metallica catalogue, but has also attracted criticism, mainly related to the song structures and production quality. Let’s talk about that.

Criticism from some quarters has been directed at the song lengths (seven of the nine are over six minutes long) and overt complexity. I beg to differ. These songs are absolutely stuffed with fabulous metal riffs, from the haunting symphonic intro to “Blackened” right through the thrash assault of “Dyers Eve.” The two shortest songs — “Harvester of Sorrow” and “Dyers Eve” — are my personal favourites, and would have fit nicely on the predecessor Master Of Puppets. I have to admit that my least favourite song on the album is the band’s first official video and ‘hit’, “One”. Also, the intro to “The Frayed Ends Of Sanity” is a bit odd, but the song quickly improves from there. The 9+ minute instrumental, “To Live Is To Die”, receives a credit from the deceased Burton.

Now to the production, which has drawn criticism on a few fronts. I personally find that the guitars and drums are well recorded; drier than the previous two albums, but very powerful and lock tight and in keeping with the album’s bleak outlook. But … where’s the bass?? This has always been the ‘elephant in the room’ for …Justice. The most common explanations provided over the years have been that Jason ‘Newkid’ mimicked James Hetfield’s rhythm guitar, and therefore his bass tone blended in, and that Hetfield’s ‘scooped’ tone also buried the bass. Another, more cryptic, explanation is that the bass was deliberately mixed so that it was not audible. Newsted was not happy with the result, and I think that the album would have definitely benefited from his distinctive Geddy/Geezer/Lemmy influenced clanking bass tone.

I caught this tour at the Ottawa Civic Centre on April 6 1989, which was my third Metallica show at the time. Strangely enough, my highlight of the evening was opener Queensrÿche, who delivered a surprisingly gritty set and were a fantastic contrast to the headliners.

Thirty years on, the album is now also available in a remastered format (but not remixed, so still no bass guitar).

Reviewed by Metal Mike:
To be honest, in 1988, I borrowed …And Justice For All from a friend and made a copy on one of those dual cassette decks with high speed dubbing, before I had heard a note of the album. I was so pissed that it took up most of a 90 minute Maxwell XL because I had to flip the tape over to get three more songs! Now, expecting an extension of Master Of Puppets, I think like most people I was surprised by Justice. It had a new sound, a new vibe, and a very different version of Metallica. I recall how many people at the time were violently split between the band’s old and new sound… similar to how the die-hard fans felt following release the so called Black Album in ’91.

Sure Justice sounded different. Years later, people would speculate that the bass lines of newcomer Jason Newsted were intentionally muddied or dropped altogether. There are tons of conspiracy theories, but I figure it was simply part of the band’s experimentation. RollingStone addressed the issue earlier this year and hopefully put it to rest. No matter, I liked Justice on its own merits as a “three-piece” with Newsted relatively tuned out. James Hetfield’s vocals are angry. Lars Ulrich did some of his best drum work until the late 2000s, and Kirk Hammett laid down wicked solos. I wasn’t particularly into politics back then, but the album cover alone hit me that there was more to the world than Poison’s recently released “Nothing But A Good Time” from the thought provoking album title Open Up And Say Aah…

This was an immensely dark album both musically and lyrically… something that didn’t really fit in with my tape collection at that time featuring Priest, Cinderella, Guns N’ Roses, and Van Halen. And yet, I recognized it as being an album that was pivotal to the music scene. Just over one month after release, Justice peaked at #6 on the Billboard Hot 200, and stayed for 121 weeks. In fact, I still have the January 1989 edition of RollingStone gushing over the band and its live shows, landing on the charts without the benefit of radio airplay or a video (at that time). The video was released subsequent to publication of the article).

In as much as Appetite For Destruction launched a new, uglier, and sleazier wave of so-called “hair metal”, I think it was Metallica’s “One” that allowed the heavier thrash genre to become more accepted on mainstream radio. Hell, I remember working at a radio station in the summer of 1989 that had a daytime playlist of Whitney Houston and Rick Astley. After 7 pm, those tracks could be mixed with “One”, “Paradise City” or “Once Bitten Twice Shy” quite easily. Ahh, different times! The fact that “One” was the first real video ever released by the band was also significant, considering Metallica had always been steadfastly opposed to doing any MTV style video other than live performances.

What basement guitarist in 1989 couldn’t play the intro to “One”? What metalhead of any stripe didn’t perk up to that song just after the four-minute mark when the rapid fire guitar/double bass kicks in? “Darkness/imprisoning me/all that I see/absolute horror”… ya. Despite the fact the lyrics were written as an anti-war song, and the video was based on a 1971 war film, it spoke to a budding generation of politically inclined teenagers, or at least ones dealing with their own dark and brooding thoughts. People champion Metallica’s so called Black Album as their mainstream breakthrough, particularly due to the success of “Enter Sandman.” Yet, I disagree. Justice (or at least “One”) was far more accessible than their previous albums to radio, MTV and mainstream hair/hard rock fans who were becoming accustomed to a heavier sound. Metallica have always tried to reflect the music of its time, for better or worse. In 2018, they are now one of the most popular metal touring bands in the world. Kill Em All, Ride The Lightning, and Master Of Puppets built a core fan base, but …And Justice For All acted as a spring board for its later mega successes and solidified Metallica as a must-see band 30 years later.

I am not going to examine this album track by track, since the whole is bigger than the sum of its parts. Yes, “One” was the focal point. Certainly “Blackened”, “Harvester Of Sorrow” and “Frayed Ends Of Sanity” were all excellent, but different from the thrash sound Metallica were known for on previous albums. This is why Justice succeeded — it was heavy enough for existing fans to buy in, but not so fast and thrashy that it would scare away the newbies. To me, this is not only a classic heavy metal album, but also an all-time classic rock album in general. Not having this in your collection would be the equivalent of missing out on Led Zeppelin IV, Back In Black, or Long Cold Winter.

By the way, these are simply my thoughts on Justice over 30 years, since I have not heard the remastered releases yet.  ]The 2018 remastered three CD set with demos and live versions is available, as well as an expanded Remastered Deluxe Box Set available on Amazon.

Reviewed by Olivier:
It may seem odd but …And Justice For All is the turning point in my mind when Metallica hit critical mass. After refusing to release a video to support any of their albums (1983’s Kill ‘Em All, 1984’s Ride The Lightning and 1986’s Master Of Puppets) even though the video medium was clearly propelling bands to explode into the mainstream, Metallica relented or “sold out” by releasing their debut video the song “One.” While many did think or state that Metallica sold out by releasing a video and a “ballad” no less, the reality is that the thrash metal giants were already playing “ballads” from the get go with the powerful “Fade To Black” from Ride The Lightning being a prime example. In terms of the video itself, it was probably the least commercial video you could see with old black and white footage of war and a poor soldier getting operated on. If anything, the video was as metal as could be.

For me, the song “One” was clearly the highlight on …And Justice For All, standing the test of time, with the rest of the tracks being “alright” and in particular, the new Metallica sound clearly lacking something. Every album thus far (and every subsequent album with the exception of Load to Reload), Metallica had changed their sound so I knew that …And Justice For All would not be a replica of the now classic metal album Master Of Puppets. Later on, I would learn that the something that was missing was the bass guitar that was clearly cranked down from the mix. Frankly, it’s almost puzzling why this was ever done as the band had a new bassist Jason Newsted and what better tribute to deceased Cliff Burton than to pay respect and homage to his bass playing by having his successor’s bass playing get the spotlight?

I’ve always viewed …And Justice For All as the clear cut weakest Metallica album out of the big five (which also includes Kill ‘Em All, Ride The Lightning, Master Of Puppets and the Black Album). It’s not a bad album in any way (aside from the lack of bass) but it’s definitely not at the level of the other four records. Tracks like “Blackened” and “Harvester Of Sorrow” are solid tracks but don’t add anything to Metallica‘s legacy. I must confess that even though I knew all the songs, I never did purchase …And Justice For All until a few decades later. Why you may ask? Well, I had a good friend who listed Metallica as his favorite band and once …And Justice For All came out, he played the shit out of that album at his place (where I used to hang out quite a bit). So I have always been very familiar with the record but it’s also when I started to turn away from Metallica. I had discovered Metallica via the Ride The Lightning album in 1984, enjoyed Master Of Puppets (although I liked Ride better) and started losing interest with …And Justice For All just as the band was hitting mainstream in a big way. Who would have known that Metallica would truly hit the big time in ’91 with the Black Album becoming one of the top 40 selling albums of all-time?

As has become the custom for Metallica‘s earlier records, a remastered version of …And Justice For All was recently released. The album was only remastered and will likely assist the thrash metal giants to sell another million copies of the record. The bass is still really low in the mix and I frankly like the original album sound better than the new remastered edition. It seems like the rawness and fury of the original record has been lost a little bit in the remastered edition, which has a thicker more polished sound. Overall, …And Justice For All is still the fifth best Metallica album although I find it a distant fifth to the aforementioned four records released by the band from 1983 to 1991.

Metallica’s official music video for “One,” from the album “…And Justice for All.” Subscribe for more videos: https://tallica.lnk.to/subscribeDirected by B…