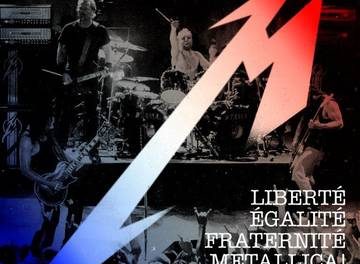 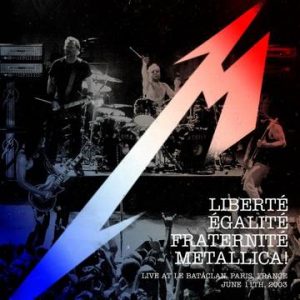 Review:
One of 20,000. I have number 03787. Limited. Well sort of. Overall, however the numbers in Canada would be very low as this is a USA Record Store Day release. Some stores in Canada had the pull however to be able to get this nice little CD in. Yes CD… on Record Store Day. Metallica had the number one seller on Record Store Day 2015 with a cassette. This year, the number five seller is this CD. I wonder if Lars Ulrich is the mastermind behind this somehow? I can only assume he wants next year’s Record Store Day (“RSD”) release on eight track or reel-to-reel tape. 8TSD and R-T-RSD to follow.

The concert was recorded on June 11, 2003 at Le Bataclan, Paris, France to promote the St. Anger release. There were three separate club shows on that day in Paris. The reason this particular concert was chosen was to honour the victims of the 2015 shooting at the theatre. All band proceeds from the sale of this CD go to Fondation de France’s Give For France charity. Of note is the fact that bassist Robert Trujillo had only been with the band for four months prior to the recording of this show, and St. Anger had only been out for six days (Bob Rock played the bass on that album).

“The Four Horsemen” — The crowd screams and off we go. Pounding drums, wailing guitars and a slightly overpowered bass let us know this is old school metal. James Hetfield adds in the obligatory “yeah, yeah yeahs” and some “die, die, die” for good measure. The middle of the song has some sweet guitar solos.

“Leper Messiah” — Cymbals crash and guitar strings are abused. Again with the wicked guitar solos. This is becoming a thing. About five minutes into the song, Hetfield does his own version of beatbox. Hetfield says after “Merci Beaucoup. It’s good to see you my friends.”

“No Remorse” — Sweet metal guitar riff flood our ears to begin this song off. Hetfield asks the crowd “Are you out there?” He calls out Mr. Ulrich, and the drums and guitar continue on towards the abyss. A wicked laugh from Hetfield and a “Thank You. Merci.” end the song off. The crowd chants “Metallica! Metallica!…..” in a cute French accent.

“Fade To Black” — As good as the three previous songs were, this is the beginning of the show for me. The energy level is so high, and I am sure the crowd intensity just rose as this song began. It is such an amazing song. You know it is live because it doesn’t have that mechanical perfection of the studio version, but this might be the best live version I can recall hearing. As someone who has seen Metallica a few times, I can attest to the fact that this song is absolutely wicked live. Hetfield addresses the crowd “Hello friends. Are you doing ok?” and “Oooh yeah.”

“Frantic” — Hetfield asks the crowd “Who has St. Anger?” The crowd cheers. “Do you like it?” They cheer again. “Right. We’re gonna do some stuff off of it.” “What song do you wanna hear?” I guess that was rhetorical as they start into “Frantic” and Hetfield exclaims “This here is the French version entitled Frénétique.” I know this album takes a ton of flak from Metallica fans, but as a fan, I like it a ton, and this song is one of the best. It sounds at least as good, if not better live. There was criticism for the drum sound and the lack of guitar solos on the studio album, but the drums and guitars sound great here. This is a fairly rare recording as Metallica left all of the songs from St. Anger off their setlists for a long time. This song has only been performed a handful of times since 2004. I can only assume fan backlash to the album is the reason why. Too bad. It’s a great song.

“Ride The Lightning” — Hetfield asks the crowd “What’s new pussycat?” then gets into a back and forth of “Wooo” and “Yeah” with the crowd. I can only assume to get in the mandatory number of “yeahs” in during a performance. Something in the fine print of his contract I bet. Hetfield introduces all of the band members, including some “Love and respect for Robert” and he let’s the crowd know “We haven’t played this song in a while. Love it baby.” That is quite an understatement since the band last played it in 1987. Sixteen years between playing it live was too long. It’s an awesome song. I have no idea why it was off the list for so long. Perhaps it took Kirk Hammett‘s fingers that long to heal from the wicked guitar solos.

“Blackened” — Pounding drums and thrashing guitar begin the first minute of this song off on a wicked frenzy. They never really let up, but Hetfield jumps right into the deep end and doesn’t sink. Half way through the song when they get to the word “Blackened”, the drums pound, and the crowd yells “Hey, hey, hey…….” over and over. Hetfield yells back “Yes sir” and Hammett sucks us in with some amazingly hypnotic guitar work. I believe Trujillo is doing the background back and forth chants with Hetfield in the middle of this song. Nice to see you joined the show Trujillo. Were you out getting croissants or something? I think I actually heard a little bit of bass in this song that stands out too. Hetfield thanks the crowd after this song. I wonder if this was the end of the first part of the show and the two remaining songs were an encore. Clapping and crowd cheers of “Whoah Ohh Ohh Ohh Ohh Ohh….” and “Metallica, Metallica…” ensue. My guess is the band was backstage for a bit and the crowd was trying to entice them back.

“Seek & Destroy” — This song starts off with a back and forth between Hammett and the crowd. Hammett strums his guitar “wah wah wah wah wah” and the crowd yells back something. I can’t tell what it was, perhaps it is in French. It kind of reminded me of the crowd yelling ‘Angus‘ during live performances of Whole Lotta Rosie. About a minute in, Hetfield says “You ready for some more? What do you want?” Another rhetorical question. “Woooo. Here we go.” as Seek & Destroy begins and the crowd screams in pleasure. “We’re scanning the scene in Paris tonight.” Ulrich sounds better here than he perhaps ever has. Hammett sounds awesome as usual. Hetfield‘s voice is in prime form. The background vocals sound great. Again, Trujillo is the only one kind of lost in the mix. However, this is an amazing live version of this song. Hetfield tries to entice the crowd to do a back and forth and sing the lyrics ‘Seek & Destroy’ after he says the ‘Searching’ but we can’t hear them. Probably the only time during this show the crowd wasn’t as engaged. The ending features Hammett holding one sustained note, and Ulrich smashing the cymbals, then finally for a brief few moments, the intensity level for both musicians rise and suddenly stop. Hammett almost has a little Dimebag sound to this little riff. Great ending.

“Damage, Inc.” — The crowd is still cheering from the end of the last song, and yelling something at the band (I again can not understand them). Hetfield exclaims to Hammett, “That’s what you’re trying to tell me.” and “Now I’m better. Now I’m much better.” I did not understand this until I saw the video of this, and he exchanged his guitar. There must have been a sound issue. Hammett and Ulrich smash out the beginning of “Damage, Inc.” The guitar and drum work here is stupendous, fast and loud. I prefer the chorus portion of the lyrics on this song, as the rest are sung quite fast, but this song overall kicks ass.

“Merci Beaucoup. Thank You Paris. Metallica loves you. Thank You.” Paris (and the rest of the world) love you too Metallica.

Hetfield asks “How can you have goosebumps man, when you’re this hot?” I can only imagine how electric the crowd must have been to cause the lead singer of the biggest metal band in the world to get goosebumps. The crowd yells “Metallica, Metallica…” over and over. Hetfield again says “Thank You” and adds “Très Fuckin’ Bien.” Then just like that it’s over. Sixty three minutes and 11 seconds of awesome.

The sound and recording of this album are amazing. The banter, and the back and forth between the band and the fans really take this recording over the top for me. I would have preferred a different setlist, but I can only assume since they were doing three shows in one day, that perhaps the other two shows got different songs. It seems strange to me that this three show, one day stop in Paris does not feature more songs from St. Anger, since that is the album they were trying to promote at the time. Also, Trujillo‘s bass gets lost in the mix. I assume since he was new to the band, and really still learning, it may have been on purpose. He is not bad, he just isn’t noticed much, if at all. I would have preferred an earlier recording with Jason Newsted or Cliff Burton, or a later recording with Trujillo when he was settled in, but for all I know this was the last (possibly the only) time Metallica performed at Le Bataclan. It is much smaller than the stadiums they usually perform at. These are very minor drawbacks to an amazing album. Also, the fact that it is for a good cause to help fellow music fans that were in the wrong place at the wrong time.

Reviewed by Boppin of Boppin’s Blog for Sleaze Roxx, April 2016