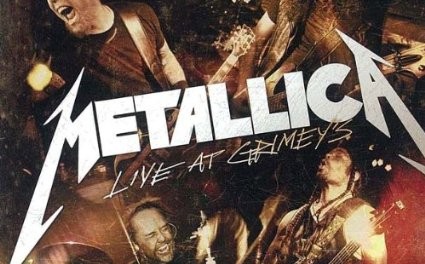 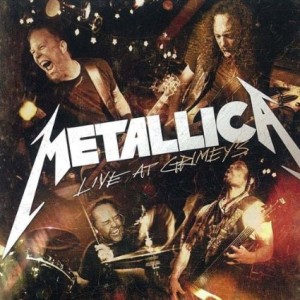 Review:
As it turns out, I am a few days late with this CD review to celebrate the five year anniversary of the release of Metallica‘s Live At Grimey’s. I have always liked this rather short nine song live album from the metal giants because the primitive sound complete with warts, the rough vocals from singer James Hetfield, and the banter between the fans and Hetfield, gives you the impression that you are actually there in this small club with arguably the biggest heavy metal band in the world.

It is always incredible to me how one band can be so big and revered by millions and millions of people while another band that plays similar music may be virtually ignored and only known by a handful of people. Certainly, Metallica fit the former description having taken down many musical boundaries for themselves along with thousands of other heavy metal bands. While there is no question that the songs offered by Metallica on Live At Grimey’s are very good songs, I always wonder why these tracks are loved by millions of people and so many other artists playing similar songs are dismissed and/or ignored.

Given Metallica‘s vast catalog of stellar songs, the band could have offered an entire different setlist than what is contained on Live At Grimey’s and that would have been perfectly fine as well. There are only three tracks out of the nine — “For Whom The Bell Tolls” from Ride The Lightning, “Master Of Puppets” from the album of the same name and “Seek And Destroy” from Kill ‘Em All — on Live At Grimey’s that I would think that Metallica would most likely offer up if the setlist was limited to nine songs on another night. The rest of the tracks are what I consider “deeper” cuts although songs such as “Welcome Home (Sanitarium)” and “Sad But True” have been Metallica concert staples since the metal giant has first released those songs. The only track that is a surprising inclusion is the rather short jam of “The Frayed Ends Of Sanity” from …And Justice For All which is mostly sung by the audience and shows how diehard Metallica fans know all the songs and not only the popular ones.

Hetfield‘s interactions with audiences have always felt genuine to me and again, I get that same feeling when I listen to Hetfield address the around 175 or so capacity crowd at The Basement of Grimey’s in Nashville, Tennessee, USA. The one band member interaction that irks me however is when drummer Lars Ulrich jokingly tells the crowd that there are “people from Warner Bros.” in the audience, the band wants to “get out of the basement and get a record deal” and for fans “to give it all you have” so to make an “impression” on the Warner Bros. executives on the premise that Metallica have yet to secure a record deal. I find that Ulrich just comes off as pompous and arrogant with his comments and especially when there are so many great acts out there that are and continue to be completely ignored by seemingly stuffy record label executives all over the world.

Aside from that one misplaced Ulrich comment, I like everything about Live At Grimey’s from the setlist to the small club live feel to the raw type recording. If you don’t like the setlist, you can always pick up one or two other live EPs (Six Feet Down Under EP and Six Feet Down Under Pt. 2) released by the band. For reasons unbeknownst to me, Metallica thought that rather than just offer a deluxe CD package with all three live discs, it would be better to release three different live “EPs” in a span of a couple of months during the fall of 2010.  This looks like a bit of a cash grab but at the same time, it simply gives people out there more choice on what to purchase. In any case, Live At Grimey’s is one Metallica live album that I have been routinely listening to year after year since its release.

6/12/08 Nashville, TN – Metallica surprised about 175 people with a fast hour set in The Basement of the local record store called Grimey’s!Harvie live and J…