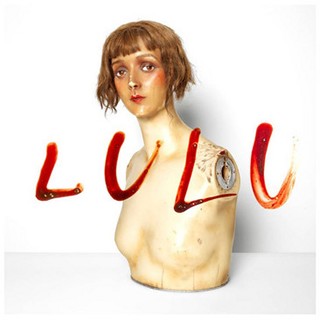 Review:
The brand new collaboration between Lou Reed and Metallica has been raising eyebrows ever since news first broke that the two were teaming up for a project. Music fans, especially Metallica‘s legion, had every right to be fretful because the partnership created one of the absolute worst albums I have ever heard.

Just how atrocious is the new album Lulu? Throwing a running chainsaw into a wood chipper would be more harmonious than this debacle. I try and listen to an album at least five times before I even attempt to review it, which allows the music a fair chance to grow on me. However, with Lulu it was one listen (from start to finish) and I was done. My ears were tormented for 87 minutes and could tolerate no more. Luckily, I streamed the entire album on the ‘Lulu’ website instead of wasting money on an actual copy. I challenge you to do the same since this is an album you have to hear to believe (how awful it is). However, I will completely understand if you do not make it through Lulu — it’s the ultimate exercise in patience.

Backed by chugging, stale riffs courtesy of an uninspired Metallica (who can blame them given the material they were presented with), Reed angrily rants (never once even attempting to sing) like a beatnik reading poetry no one cares about in an empty coffeehouse. His overall delivery sounds like Henry Rollins‘ grandpa suffering from senility. Just when you start to somewhat fancy Metallica‘s musicianship, Reed‘s diatribe-like rambling overtly ruins the song.

In an interview with ‘The Guardian’ Reed said, “This is as good as my writing gets. I can’t do better. I listen to it and my poor heart breaks over some of what’s in it.” If this is indeed Reed‘s best work, I flat-out fear his worst. In that same interview Hal Willner, the album’s co-producer, explained, “The music is demanding on the listener, no question. I don’t know what to call it, but it is not background music.” Even Metallica‘s own producer doesn’t understand Lulu, so how on earth did it get green-lighted in the first place?

Metallica drummer Lars Ulrich elaborated, “I’m invigorated at how absolutely awesome the record turned out. Lou walked into the studio and about seven seconds later my head was spinning like Linda Blair in ‘The Exorcist’. It was so impulsive it’ll take me years to access what happened.” And just like she did under Satan’s manipulation, Lulu would also trigger Blair to project vomit.

Metallica‘s James Hetfield and Kirk Hammett were both reportedly brought to tears by Reed‘s lyrics in the song “Junior Dad.” Both claim it emotionally moved them, but I bet the line “the greatest disappointment” suddenly woke them out of their idolization of Reed and they realized they were trapped on a sinking ship, causing them to weep uncontrollably. Though reviews have been unanimously negative (leading Reed to say, “I wouldn’t care what a critic said about anything, including a hamburger joint. There is no species of people I have less respect for”) I have stumbled across a few people defending Lulu as art. I am sure you have come in contact with the type of person that constantly describes unworthy items as ‘art’. One who suffers from this characteristic believes they are functioning at a higher level than the normal person, and therefore see beauty in things our feeble minds fail to understand.

For those ready to accuse me that ‘I don’t get Lulu,’ allow me to clarify what art is. Van Gogh’s “Starry Night” is art. “Stairway to Heaven” is art. “Catcher In The Rye” is a work of art. Lulu on the other hand, is a train wreck of epic proportions unworthy of any praise whatsoever. Just because an artist thinks outside the box, doesn’t automatically mean their creation is brilliant.

Metallica once blew us away with the song “Damage, Inc.”, but now they desperately need some damage control. They should publicly apologize for this calamity, host a bonfire for people who purchased the album, forever ignore Lou Reed (including unfriending him on Facebook) and record a Heavy Metal masterpiece that stands up to their classics Kill ‘Em All and Ride The Lightning. Unfortunately, after years of weakening albums, the Napster incident and now the Lulu experiment, hopes of Metallica returning to true form diminish by the day. This is ‘Lu-Lu-Ludicrous’.