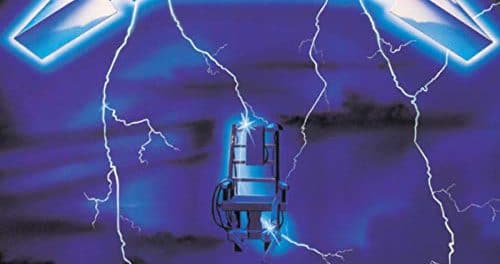 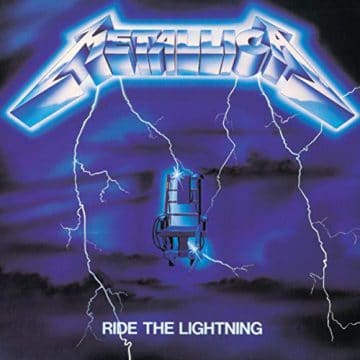 Review:
Funny enough, I was going to start this album review celebrating the 35th year anniversary of the release of Metallica‘s Ride The Lightning record with a tale of how that album along with Armored Saint‘s March of The Saint and W.A.S.P.‘s self-titled debut album were the first “taped” albums that I got in cassette format and records #4 to 7 of my very small hard rock and heavy metal collection back in September 1984. However, I have already mentioned this in two prior concert reviews (Metallica in 2017 and Armored Saint in 2018) so I will reminisce about something else.

Metallica are now a household name and likely now the most popular heavy metal band in the world but back in 1984, they were a stubborn bunch who refused to release any videos in support of their albums. I point this out because when I got my “taped” copy of Ride The Lightning, I was not aware of what were the singles for that album. In other words, I listened to the record with no preconceived notions of what a band or label had identified as the lead song or single for the record. In fact, I knew nothing about Metallica when my former elementary schoolmate Brian provided me with the three aforementioned albums. Back then, I think that I was a lot more open to any new sounds since if I was hearing Metallica‘s Ride The Lightning today and particularly the opening track “Fight Fire With Fire”, I would likely dismiss the entire record as some sort of basic thrash metal album with little to offer in terms of melodies. This would of course be a big mistake as Ride The Lightning is not a one dimensional thrash record and in fact, many of the songs on the record have more than stood the test of time with usually three out of the eight tracks (“For Whom The Bells Toll”, “Creeping Death” along with either “Fade To Black” or “Ride The Lightning”) still in Metallica‘s live set to this day.

Since I was not familiar with Metallica at all when I first listened to Ride The Lightning, the song that made the biggest impression on me was actually “Trapped Under Ice” with its furious guitar solos throughout the track. In fact, I believe that I named “Trapped Under Ice” as my favorite song back when it seemed important to me to list out my favorite songs from each band on an almost daily basis. It almost boggles my mind how much free time that I had when I was a youngster. I would play an album over and over while reading the latest magazines such as Circus and Hit Parader, and while cutting up the various photos to paste on my bedroom walls. Eventually, I ran out of room on my bedroom walls so I started evaluating if the potential incumbent photos were better than the ones currently pinned to my bedroom walls. One of my friends even pinned photos on his bedroom’s ceiling but I (or perhaps my mother) thought that was a little excessive.

While “Trapped Under Ice” continues to be one of my favorites on Ride The Lightning, the cream did rise to the top and I’ve got to say that “For Whom The Bells Toll” and “Creeping Death” are some of the best heavy metal anthems out there. These days, “Fade To Black” is my favorite off Ride The Lightning. While I would categorize “Fade To Black” as a “heavier” ballad these days, back then, I didn’t see it that way since the song was so heavy and does pick up quite a bit as it goes on. Whatever the case, I still get goose bumps hearing it. Given that I grew up listening to Ride The Lightning, the record is deeply embedded in my mind and the title track’s lyrics “burning in my brain” sum up well how well I know the album.

Accordingly, I admit having a somewhat biased view of the record but when I listen to it now, I realize that a couple of songs are a bit weaker than the rest. The opener “Fight Fire With Fire” shows little imagination and is why I consider it these days as a basic thrash song with little in the way of melodies. “Escape” is another song that would fall below average if I would be listening to it for the first time today rather than having grown up listening to it. The rest of the tracks are good (such as “Ride The Lightning”) to stellar (“Fade To Black”). Back in the day, I used to hate instrumental tracks but perhaps over the course of listening to Ride The Lightning over and over again, I have always liked the album closer “Call of Ktulu.” Just like “Fade To Black”, it showed that Metallica could slow it down without wimping out. Frankly, “Call of Ktulu” could have easily been a classical song.

Three things struck me as I revisited Ride The Lightning for the purposes of this review. First of all, the album was a much more mature effort than Kill ‘Em All and signalled that Metallica would be changing their sound sometimes significantly from one album to the next (except for Load to Reload). Second of all, I don’t know why but it feels that guitarist Kirk Hammett has never been fully appreciated for the skills that he has brought to the table over the years. There are some great guitar moments on Ride The Lightning but Hammett never seems to be mentioned as one of the guitar greats such as Randy Rhoads, George Lynch or Yngwie Malmsteen. In any case, Hammett can shred with the best of them. Finally, I have always liked the production on Ride The Lightning as there is a real heavy and consistent feel to the album from start to finish.

Overall, Ride The Lightning probably remains my favourite Metallica album and I consider it one of the most ground breaking heavy metal albums of all-time successfully mixing a lot of classical features into the thrash metal sound. It is also worth noting that now deceased bassist Cliff Burton seemingly played a big part on Ride The Lightning given that he is credited as having co-written six of the eight songs compared to only one writing credit on Kill ‘Em All and three co-writing credits on Master of Puppets. Cliff Burton can rest in peace and is hopefully looking up from heaven knowing that he had a big hand in one of the greatest and groundbreaking heavy metal albums in history.