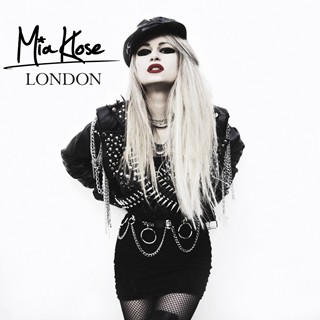 Review:
Known for her solid vocals and theatrical stage show… the emphasis is on quality… perfect fusion of metal and melody that screams radio hit.

Well, I can vouch for the theatrical stage show, but as for the other snippets from her biography, I wish they’d been proved in her debut album. Mia Klose is from Sweden but the album was produced in London and it is almost painful for me to see this wonderful city’s name on this album.

Klose‘s image is one you would expect of ’80s metal — leather, lace, the long hair and heavy eye make-up. I was excited that a girl had finally put herself out there in this genre because we’re rapidly losing female contributions… even bad ones. The likes of Lita Ford, Joan Jett and even Sister Sin‘s Liv Jagrell are either fading or are largely unheard of. Unfortunately this album does not ooze with the attitude and balls of the genre Mia Klose claims to be a part of.

“Open Your Eyes” lacks the fundamental ‘I-don’t-care-what-you-think’ vibe, and while the song is fairly catchy, it just seems a little unstructured and all over the place. Klose‘s voice is quite shrill and nasally, and the whole thing is too polished and over-produced for a raw, ’80s sound. “Mama” has a better riff with more drive but the fierceness from Klose just comes across as too fake and… dare I say it, wannabe? Fans of Guns N’ Roses will immediately hear “Paradise City” during the opening of the ballad “Living For Tomorrow” — if only the song wasn’t so long and repetitive.

“London’s A Heartbreaker” is possibly Klose‘s best-known song and it’s a shame that it blends in with the rest of the album so much. The last three tracks were, musically, more promising although there’s nothing here to blow you away or to even prick your ears. The solos are better and the compositions more solid — “Lady Killer” has a bit more guts about it and I liked the opening of “Never Too Late”. More often than not the problem is that the vocal melody doesn’t run in harmony with the instrumental tracks and the result is something incoherent that is hard to listen to.

I’d be interested to see Mia Klose‘s live performance, especially in terms of her vocal skill, as there is nothing overly promising on London. I think the potential could be developed and turned into something a bit more aggressive to match her image, but this album has left me wondering if there’s anything behind it all. At the moment I don’t see the talent to achieve her goals, but rather an artist who seems to have put a lot of focus on her media image and over-styled biography. It’s a shame because the passion is obviously there.