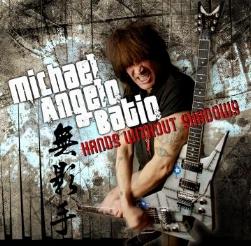 Review:
I’ve never been much of a fan of instrumental albums, and I was also not big fan of Michael Angelo Batio‘s previous band Nitro. So it came as a surprise that I was able to find Hands Without Shadows listenable, and perhaps the reasoning is that most of the songs here are well known classic rock staples.

So you may be wondering what makes Hands Without Shadows different then a budget priced karaoke disc with the vocals cut out. The answer is simple, Batio‘s speed (he rips through what seems like half the Led Zep catalog in just over seven minutes). Now I’m not a guitar player, and I don’t know all the lingo, but I know when a guy has talent.

Actually Michael stays fairly true to the originals, but incorporates his own over-the-top style to each song. I’m not so sure his additions fit with the original music, but that is what makes this different then a simple copycat.

I’ve always felt that instrumental albums make for better background listening then anything else, and Hands Without Shadows falls into the same category. Shredders will appreciate this more then I do, but even a casual fan such as myself can acknowledge the talent being displayed. Ya know, with Christmas right around the corner, this could make for some cool background music for your upcoming holiday celebrations – and sure beats the hell out of Kathy Lee‘s latest festive abomination. www.angelo.com.