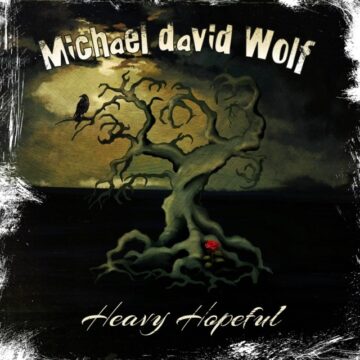 Review:
Michael David Wolf is a Canadian artist/singer who has recently released his second EP in the last year. I myself reviewed his Syzygy EP earlier in 2020. Heavy Hopeful is Wolf’s latest piece of work and I have to admit that I am very impressed what he has put forth.

What I find with this collection of songs is that they are a little more cohesive than what appeared on Syzygy. Not that that release wasn’t fantastic but there was just more of a disconnect between the styles presented forth. I attribute the cohesiveness to the fact that the production may be a little more refined. I find that the guitar tones really mesh together well. Going from one track to the next, you really feel as though the emphasis has been put on the songs having a little more balance.

What I also take from this release is Wolf’s stylistic capabilities on his approach to the vocals. Wolf’s range is very well received. He sings to what the song needs. It’s not a vocalist just putting a vocal down. There are up’s and down’s in his vocal. On a song like “Take 2 Eyes”, he is actually singing back and forth with himself. It adds a great depth, but also could come across as a simplistic way of getting his point across. On the track “Lighthouse” it gives you a very east coast Canadian vibe with an almost Iron Maiden / Helloween type vocal approach. Wolf’s vocals are very strong and it seems that he doesn’t struggle to hit those high, ball-busting notes. On this track for instance, he allows the vocal to let the song breath. It is a great songwriting formula. Build the verse, into the bridge and then hit the listener between the eyes with a strong vocally driven chorus.

On the YouTube track for “I Am”, the song starts with a written statement that really makes a lot of sense – “The most dangerous risk of all – The risk of spending your life doing what you want on the bet you can buy yourself the freedom to do it later.” I had to actually read that statement a few times before I understood the true meaning.  It’s that type of analogy that is so simplistic, yet it resonates so clearly. I believe that we all have the power to drive ourselves in that very direction, but it all depends on whether we have the staying power to actually make it happen. So, with that said, it’s a dangerous risk. Well put and it actually defines the meaning of the song. It allows the listener to focus on what is being said within. I think for those of us who may have a self-professed high intellect, it helps to focus on what Wolf is trying convey lyrically.

On “The Clearing”, again Wolf takes a progressive metal approach on the intro, but then the song becomes more hard rock driven. The powerful vocal in the verse gives the song a defined type of feel. Wolf’s vocals are very precise with a Bruce Dickinson approach. I think back to Dickinson’s styling on “Can I Play With Madness.” That vocal really conveys a strong point. Almost that spoken, melodic type chaos. It takes some time to get to the chorus in this song, but when it finally does, Wolf is trading off with female singer Lindsay Schoolcraft, who is very strong in her own right. The two voices blend well because they are very different from each other so your ear can actually focus on the two of them and it doesn’t feel like a competition of sorts.

Overall, I am very impressed with this collection of songs. Like I said, there is a very strong cohesiveness. There is so much to behold for the listener. Although I didn’t mention it, the guitar work is very well done and fits to the songs. Nothing comes across highly over the top. I highly recommend this EP for fans of both hard rock and heavy metal. It is a cross between both and only thing I can say bad about this release is that you will want to hear more.