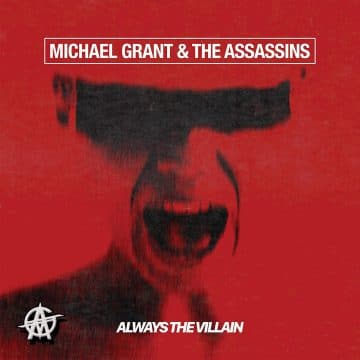 MICHAEL GRANT & THE ASSASSINS
ALWAYS THE VILLAIN
To be released on July 10, 2020 (Frontiers Music Srl)

Review:
One would be excused if the name Michael Grant doesn’t immediately ring a bell. As the creative driving force behind San Francisco based alternative / hard rock band Endeverafter, and after a five-year tenure as guitarist for L.A. Guns, the talented rocker has finally broken out on his own.

Brewing since 2018, Always The Villain is Grant’s debut album, and what a surprise it is! It’s a solid collection of 11 hard rocking tunes with a ’80s sleaze / ’90s alternative metal flavor delivered with a punk rock attitude. Grant plays all the instruments on the album except for drums on five tracks, which are performed by Shane Fitzgibbon.

First single “Red Light Run” is a groovy banger about a vixen’s tale of revenge, decorated with bendy guitar riffs and an energetic rhythm section. The song is further propelled by the soaring vocal harmonies on the catchy chorus, while tracks “Death of Me,” “Runaway (Can You Stand The Rain),” “Anthem of Us” and “Break Me With U” also contain insanely infectious singalong choruses. Grant’s vocals throughout the album are vibrant and engaging, comfortably sitting in a melodic mid-to-high-range croon, while his guitar playing is nothing spectacular or shredding, his leads are tasteful and emotive when needed. In addition, the album is encapsulated in a warm and robust production, also handled by Grant.

Always The Villain rocks from start to finish. Grant has undoubtably escaped from under Tracii Guns’ shadow and proves that he’s not just a hired gun, ensuring that this album is a good step toward making it on his own.

Michael Grant & The Assassins‘ “Anthem of Us” single: