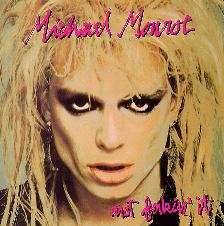 Review:
Not Fakin’ It was the second effort (first to be released stateside) from ex-Hanoi Rocks singer Michael Monroe, and would prove to be the vocalist’s most successful album and a sleaze rock classic. Released singles were the exceptional rockers “Dead, Jail Or Rock ‘N’ Roll” (which featured members of Guns N’Roses in the promotional video) and “She’s No Angel” (a remake of the Heavy Metal Kids song), as well as the haunting ballad “Man With No Eyes”. But there isn’t a bad song on the disc, be it the cover of Nazareth‘s “Not Fakin’ It” which begs you to sing along, the mid-tempo “All Night With The Lights On” or the rocking album closer “Thrill Me”.

The sound here is hard/heavy rock mixed with blues, as Monroe has stuffed this album full of celebrities such as Little Steven, Hanoi Rocks alumni Nasty Suicide, Anton Fig (best known as a member of David Letterman‘s late-night TV band) and the legendary Ian Hunter. Not Fakin’ It is a very good album, and in a perfect world would have received more recognition on it’s way to massive sales. I would also like to give sympathy to Michael since he lost his wife June to cancer, by giving this record two thumbs up!