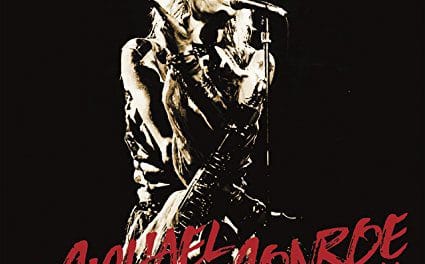 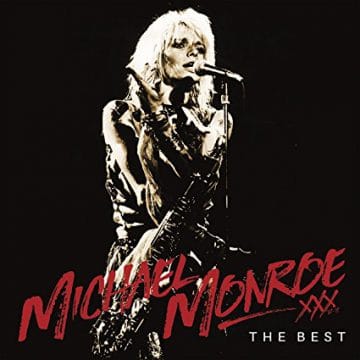 Review:
There’s no question that Michael Monroe is one of The Best rock ‘n’ roll frontmen out there, now or ever. His thin towering frame with a stage presence screams ‘cool.’ Surely if you didn’t discover Michael Monroe when he fronted Hanoi Rocks, you probably discovered him on MTV’s Headbanger’s Ball when the either sleazy rocker “Dead, Jail Or Rock ‘N’ Roll” or the poppier, more accessible “Man With No Eyes” (both featured here) off his 1989 second solo effort were in regular rotation on the channel. I consider Not Fakin’ It his first ‘real’ solo outing as 1987’s Night Are So Long featured three originals and seven covers. The aforementioned also wasn’t released domestically which made it virtually impossible to find as a teenager (which I was at the time of its release).

The true gems on the The Best (aside from the Sensory through Blackout States tracks) are the tunes from Michael’s band Demolition 23 (featuring Hanoi Rocks alumni Sami Yaffa on bass and Nasty Suicide on guitar). Demolition 23 was formed in 1993 and issued a ‘self-titled’ album which was (you guessed it) released as an import only via Music For Nations. Demolition 23 imploded shortly after the album’s release and Monroe moved on as a solo artist. The tracks that represent Demolition 23 on The Best are “Nothing’s Alright,” “You Crucified Me,” “Deadtime Stories” and rounded out by “Hammersmith Palais” which is the best track of the lot. The question I have is if you’re including Demolition 23, why not also represent the (1992) Jerusalem Slim project? At least in demo form as the album (you guessed it again) was only released as a Japanese import. Monroe has expressed his ‘dislike’ for the album as he told Sleaze Roxx in August of 2011, “Steve Stevens and I made some great demos and he’s a very talented player. On the demos he was playing stuff that I liked — it was a very early rock ‘n’ roll leaning sound, more towards the Chuck Berry style of two hands on the neck type of thing. The record label brought in Michael Wagener as producer — he’s a heavy metal producer who, together with Steve, took the album in a completely different direction. It became a ‘heavy metal guitar-hero’ type record and it didn’t work.”

Fast forward to the present day, Monroe has released a trifecta of marvelous recordings in Sensory Overdrive in 2011, followed by Horns And Halos in 2013 (which finished #10 on Sleaze Roxx’s Top Ten Albums of 2013) and Blackout States in 2015. All three albums were critically acclaimed and spawned hits and fan favorites like “Trick Of The Wrist,” “’78,” “All You Need,” “Ballad Of The Lower East Side,” “Stained Glass Heart,” “Old King’s Road” and “Goin’ Down With The Ship” all of which are included in this 29 track retrospective. That period of the band saw guitarist Ginger Wildheart (of The Wildhearts) leave after the completion of Sensory Overdrive, which made way for Dregen (The Hellacopters, The Backyard Babies) for the tour through Horns And Halos. Dregen eventually left and Rich Jones rounded out the Michael Monroe band also featuring Steve Conte on guitars, Sami Yaffa (Hanoi Rocks, Jetboy) on bass and Karl Rockfist on drums.

Additional highlights include “It’s A Lie” which is a duet featuring Stiv Bators (The Dead Boys, Lords Of The Church), “Self-Destruction Blues” and then there’s the newly recorded track “One Foot Outta The Grave,” and the Blackout States leftovers “Fist Fulla Dynamite” and “Simpletown.” In most instances, when a compilation like this is issued, bands ‘open the vaults’ but the unearthed tracks aren’t up to snuff. Such is not the case here. Closing out The Best is a cover of Steppenwolf’s “Magic Carpet Ride.” You know the band and you know the song but this rendition, which was recorded for the ill-fated Coneheads soundtrack many years ago features Slash on lead guitar and the end result is a ‘brick.’ Still all in all, The Best unlike the average compilation fairs much better than most and as stated, the Demolition 23 material is worth the price of admission alone.

In closing, if you’re not familiar with Michael Monroe’s earlier work with Hanoi Rocks, I would suggest that you pick up the Rock Candy Records deluxe two disc edition of their Bob Ezrin (KISS, Alice Cooper) produced Two Steps From The Move (originally issued in 1984) that was remastered a few years ago. It’s fantastic.