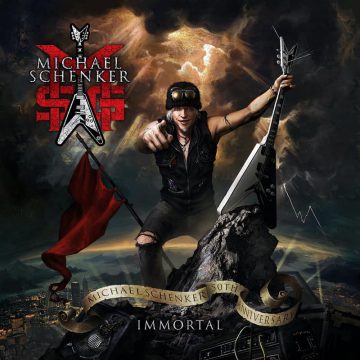 Review:
“Brave is the heart when love blinds the eyes with faith.” It could be Shakespeare, but it’s Ronnie Romero in “Sail The Darkness”, one of the ten songs off Immortal, the Michael Schenker Group’s first album in a decade. The motto is one of celebration — 40 years of the group and 50 years of career of its leader — but like Batman Forever (1995), the cast excites more than the movie itself.

Schenker understands about casting. One of the most well-connected musicians in the world, he always has true dream teams in his efforts. In Immortal, it is no different. There are seven lead singers: Ralf Scheepers (Primal Fear), Joe Lynn Turner, Gary Barden, Doogie White, Robin McAuley, Michael Voss — who co-produced the record — and representing the new generation, the aforementioned Romero. Other musicians include bassist Barry Sparks, drummers Brian Tichy, Simon Phillips and Bodo Schopf, and keyboardists Steve Mann — who also plays rhythm guitar — and Derek Sherinian.

The problem is that Immortal misses songs that do justice to the album’s title; hymns that, like “Armed And Ready” and “Into The Arena”, will be able to thrill four decades from now, surviving the relentless test of time towards immortality. Another factor that testifies against the album is one that time just can’t be healed — the guitar is buried in the bass-loaded mix. Even on the solos, the most iconic bicolor flying V of rock does not impose itself or shine as it should, interfering in Schenker’s journey as the protagonist of the show.

One must admire, however, the fact that Immortal, except for the guitars, was entirely recorded remotely; a sign of pandemic times that compel artists to reinvent their modus operandi. And it is necessary to verify the presence of the one Michael defines as the most important song of his career — “In Search of The Peace of Mind.” It’s the first song he wrote at the age of 15, which ends the track list in a “We Are The World” atmosphere, with Romero, Barden, White and McAuley sharing the vocal duties while conveying a message which greater merits are purity and timelessness.