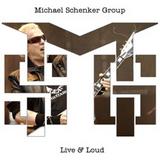 Oddly enough there’s a studio version of “Written In The Sand” with Kelly Keeling on vocals from 1999’s The Unforgiven included here, and even more odd are the two tracks that round out this album. Those two songs, entitled “History I” and “History II”, are simply narrative tracks – the first being in English and the second in German. Notable performances on Live & Loud are “Doctor Doctor” and “Assault Attack” from The Michael Schenker Story Live and “Captain Nemo” and “Lights Out” from The Unforgiven World Tour: Live.

I look at Live & Loud similarly to the budget compilations that you’ll see on the truck stop counter that are strategically placed as you go to pay for your fuel, or the impulse buys that are stocked and placed with a band’s regular catalog at the big box stores. There is little thought put into these collections and the goal is to keep them in print for a short period of time, make a few bucks, and move on.

Neither Michael Schenker nor his handlers had anything to do with this CD. If you pick up Live & Loud you will sample some of Schenker‘s work, and if nothing else, this could open the door for a fan to look deeper into the MSG back catalog.