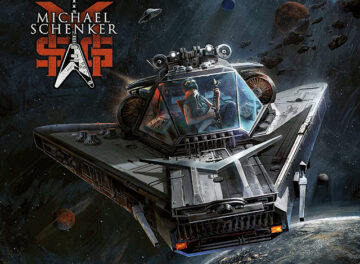 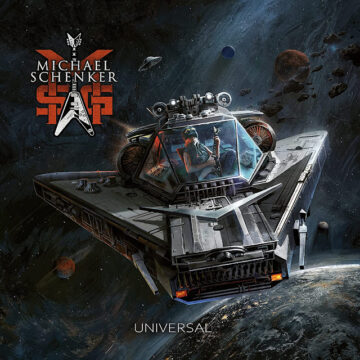 Review:
Michael Schenker is no joke. His production in recent years borders on industrial scales, and the caliber and number of guests at each new effort is always a blow to our expectations. In the recent Universal, the group formed by Schenker, Ronnie Romero (vocals), Barend Courbois (bass), Bodo Schopf (drums) and Steve Mann (keyboards) is joined by vocalists Gary Barden, Michael Kiske, Michael Voss and Ralf Scheepers; bassists Barry Sparks and Bob Daisley; drummers Bobby Rondinelli, Brian Tichy and Simon Phillips; and keyboardist Tony Carey.

But Schenker’s great merit here is to prove that a stellar cast would be nothing without a repertoire that allowed them to shine with maximum scintillation. That said, part of Universal lives up to the logic — well-structured songs, musically not only interesting but exciting and striking. And with an “additional plus”, the six unfailing strings of the guy who wields the most iconic Flying-V there is.

The homage to Ronnie James Dio, “A King Has Gone” — preceded by a Carey instrumental called “Calling Baal” — is perhaps the most important of all. In the lyrics, references to “Stargazer”, “Gates of Babylon”, “Heaven And Hell” and “Holy Diver” are finished off with verses as powerful as they are true: “Bringing the hymns to our nation / With the magical voice of salvation”.

So much mana was spent on the flagship that the mantras of (dis)love and (dis)hope “Long Long Road” and “Wrecking Ball” sound hollow and predictable. Fortunately, when the subject is serious — and you can believe that the pandemic played a fundamental role in this writing — we are treated to neat lyrics, such as “Yesterday Is Dead” and “Sad Is The Song”; this one with Romero showing why he is one of the predestined of the current generation of rock and metal singers. Hear the crown and royal scepter fall into his hands in a duet with Barden on “The Universe” and have faith — his days of “I wanna be Steve Lee” may be behind him.

Returning to the list of tributes, “London Calling” — bearing no resemblance to the eponymous track released by The Clash in 1979 — deals with the British Invasion, from which the artists and groups that formed the character and shaped the musical taste of Schenker and many of their contemporaries come from.

The CD also includes two bonus tracks: “Turn Off The World” (always good to hear old school rockers taking outrageous postures in relation to the powerful) and “Fighter”, whose final line is perhaps the great lesson that Schenker, who already ate the bread that the devil kneaded with drink and drugs, has to teach: “Surrender is only for the weak”.