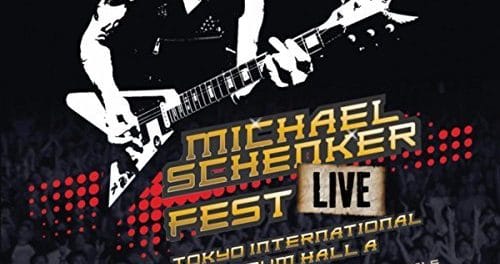 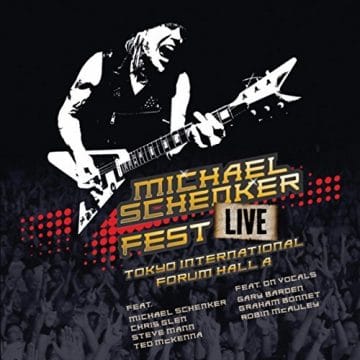 Schenker has worked with some of the greatest frontmen in rock ‘n’ roll such as Klaus Meine (Scorpions), Phil Mogg (UFO), and of course Gary Barden (M.S.G.), Graham Bonnet (M.S.G., Rainbow, Alcatrazz) and Robin McAuley (McAuley/Schenker Group). All of the latter three are featured on this live performance. Joining Schenker are original M.S.G. members Chris Glen on bass, Ted McKenna on drums and McAuley/Schenker Group’s Steve Mann on rhythm guitar and keyboards. It’s amazing how well Schenker is holding up since sobering up; his lean physique, tattered ‘skinny’ jeans, sleeveless denim jacket and beanie would look ridiculous on most men his age. The look has gone on to become just as much of Schenker’s trademark as his Dean Flying V guitar. Time however hasn’t been as forgiving to Glen, McKenna or Mann who look virtually unrecognizable from the glory days in this concert footage (and in HD — yikes!).

Gary Barden recorded a couple studio solid efforts with Schenker before he left (once again). Having caught a pair of shows with Barden back on board, he by appearances struggled vocally with the classic M.S.G. material. This performance is more or less the same. Barden looks fantastic, he still commands the stage, he has charisma with Schenker alongside him but his voice is shot. While not embarrassingly bad — it’s simply not good. It fun watching him sing “Cry For The Nations” and “Armed And Ready” which takes me back to 1986. Obviously, not the year the album was issued but rather when I first discovered M.S.G.

Barden is followed by Graham Bonnet who for decades has been sporting the ‘Sonny Crockett’ look. It’s either timeless or Bonnet is just cool because he looks good in it. Bonnet’s tenure with M.S.G. was brief but Assault Attack remains one of the jewels on Schenker’s crown. Bonnet tore through renditions of “Dancer,” “Assault Attack” and the stellar “Desert Song.”

Robin McAuley followed. He was part of the McAuley/Schenker Group. It’s safe to say this era was the tail end of Schenker’s critically acclaimed work. That might well be an understatement as the haphazardly put together Perfect Timing, Save Yourself and McAuley Schenker Group records were a mixed bag at best. Don’t get me wrong. There were a few great moments on a couple of those records and McAuley is a great vocalist but there just wasn’t enough there. The McAuley tracks included “This Is My Heart,” “Save Yourself” and “Love Is Not A Game.” Not very moving stuff. The inclusion of the rarely performed “Gimmie Your Love” would have been a nice change of pace.

With the lackluster McAuley/Schenker selections, McAuley was thrown a bone however with the UFO classics “Shoot, Shoot” and “Rock Bottom” before being joined onstage by Bonnet and Barden for “Doctor, Doctor.” All in all, a solid Blu-Ray with some cool soundcheck footage as bonus features. Needless to say this is a must have for any Michael Schenker disciple.