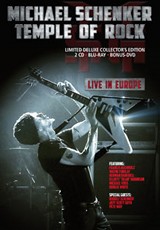 Review:
Michael Schenker has toured extensively the past few years since getting his bearings together. His last studio effort, Temple Of Rock, received mixed reviews and the line-up for the promotional tour varied from country to country. For instance, in the United States he toured with Robin McAuley on vocals yet enlisted different singers and line-ups in other countries.

Schenker‘s new DVD Temple Of Rock: Live In Europe is a slick, well produced DVD, shot live in Tilburg, Netherlands. The set is jam packed with UFO, MSG and Scorpions classics — there are 19 in all. The line-up for this DVD is of course Michael Schenker on lead guitar, longtime rhythm guitarist and keyboardist Wayne Findlay, former Scorpions members Herman Rarebell on drums and Francis Buchholz on bass along with vocalist Doogie White (formerly of Rainbow and Yngwie Malmsteen). White is a great vocalist, however his style doesn’t quite fit the Scorpions, MSG and UFO back catalog. He tends to ‘over sing’ the majority of the songs in the set — therefore making them difficult to digest at times. While Schenker and Findlay are clearly into the performance, it’s hard to believe that the remaining musicians are — they just aren’t as convincing. There’s very little chemistry with the band on stage which makes it for a slightly less than exciting sight.

Schenker plays the songs with a fire and urgency that isn’t matched by the rest of the band — which is a shame. Unlike the performance that I witnessed in winter of 2012, Temple Of Rock: Live In Europe doesn’t measure up… at all. McAuley was very charismatic and is more of a showman than White is. Granted White is a ‘better’ vocalist, but technique isn’t everything obviously. Singer Michael Voss makes an appearance for “Hanging On”, from the Temple Of Rock album, and while a great tune it brings the band’s momentum to a screeching halt. A questionable choice in the set is “Rock You Like A Hurricane”, which has been played to death — should I make mention that Michael Schenker didn’t even play on this song?! Or “Blackout” for that matter — unlike other Scorpions classics like “Lovedrive”, “Another Piece Of Meat”, “Coast To Coast”, and “Holiday” which he is featured on. Sorely missed in the set is the UFO classic “Too Hot To Handle” which could have easily replaced the over played and overrated “Rock You Like A Hurricane”, or even “Blackout”.

My rant aside Temple Of Rock: Live In Europe features all the usual suspects — “Into The Arena”, “Armed And Ready”, “Cry For Nations”, “Assault Attack”, “Lights Out”, “On And On”, “Shoot Shoot”, “Rock Bottom”, and “Doctor Doctor”. Included as a bonus on the deluxe edition are five tracks from Michael Schenker‘s set at 2012’s High Voltage Festival. This performance features special guests such as Scorpions guitarist Rudolph Schenker, UFO bassist Pete Way and singer Jeff Scott Soto (Journey, Ynwgie Malmsteen, Eyes). In addition, the DVD also offers a sound-check and footage prior to the band’s set. While not the definitive Michael Schenker live DVD, Temple Of Rock: Live In Europe is a good retrospective of what the influential German guitarist is all about.