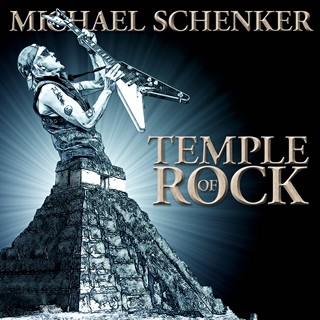 Review:
Michael Schenker‘s move to enlist a collection of his friends to write and record a solo effort after releasing a great studio album with Gary Barden in 2008 called In The Midst Of Beauty — and following it up with the acoustic Gipsy Lady in 2009 and a live DVD in 2010 — is baffling. One would think that it would be best to strike while the iron is hot, but by releasing what in essence is a solo effort seems to break any momentum that he had gained thus far.

Schenker‘s new album is entitled Temple Of Rock and it is produced by the singer of this project, former Casanova and Mad Max member Michael Voss. Yes, the title is very cliche and unimaginative, I didn’t much care for the title Tales Of Rock ‘N’ Roll either, but it’s the music that counts. There is no Gary Barden in sight on Temple Of Rock, but there are guests galore — making appearances are drummers Carmine Appice, Herman Rarebell, Brian Tichy, Simon Phillips, and Chris Slade; bassists Pete Way and Neil Murray; guitarists Wayne Findlay, Rudolf Schenker, Michael Amott, and Leslie West; singers Robin McAuley and Doogie White; and finally keyboardist Paul Raymond. This album is loaded with talent, but the question is how this all measures up musically — because as we know from the various Deadline/Cleopatra compilations that exist, big names don’t always translate into great albums.

Though not MSG material, Michael Schenker‘s riffs are still there and his playing is great, even on filler tracks like “How Long” and “Fallen Angel” (this one is the weakest lyrically on the entire album). “How Long” is revisited again as a ‘3 Generations Guitar Battle’ version with the Mad Axeman joined by Mountain‘s Leslie West and Arch Enemy‘s Michael Amott — and the odd trio duke it out with great results, however this version would have benefited greatly if it was left as an instrumental. The standouts on Temple Of Rock are “Miss Claustrophobia”, which contains one of the better vocal tracks from Michael Voss with a big chorus and hook, “Before The Devil Knows You’re Dead”, a very memorable track featuring Doogie White, and “Lover’s Sinfony”, an incredible song (despite the title) that features former MSG singer Robin McAuley. The pairing of Schenker and McAuley still works, and these guys have unfinished business after the poor effort on their last MSG studio album in the early ’90. Finally, “Storming In” represents a classic Schenker track complete with wailing guitars and power riffing that’s complimented by a killer performance by Voss.

Is Temple Of Rock an essential purchase? No. It does have its moments, but is recommended for the die-hard Schenker fans and completists only.