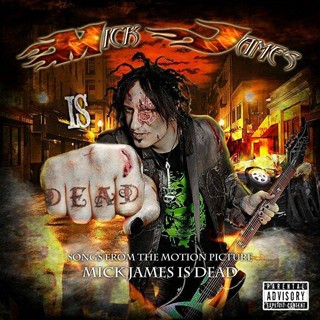 Review:
There have been all sorts of concept albums released over the years — with just as many great concepts. A trip into the drug induced nightmare of a spoiled rocker, a criminal mastermind who brainwashes a kid into committing many murders of politicians, a man going through a psychotic experience as he cares for his grandmother, and many more. However, there’s never been one from a first person account of dying… until now. Mick James‘s Mick James Is Dead is just that, a sleaze rock home video of the artist’s tragic demise.

Mick James is very well connected. He’s a very talented musician and songwriter who has collaborated with the likes of Korn‘s Jonathan Davis and Criss Angel for the illusionist’s TV show ‘Mindfreak’ — in fact, the theme is pretty much all James. He has also created music for the NFL on CBS, Real Housewives Of Miami, MTV’s Cribs, That Metal Show, and much more. Along with owning a recording studio in New York and having his own signature guitar and bass line with Carparelli Guitars, the musician has collaborated with many different people — and now has released his debut solo effort, Mick James Is Dead.

The recording of the album caught the attention of many rock and metal greats such as Skid Row‘s Dave ‘Snake’ Sabo, TNT‘s Tony Harnell, and Bobby Rondinelli of Black Sabbath, Rainbow, and Blue Oyster Cult fame — all of whom play parts on the album.

Mick James Is Dead is a mixture of sleaze rock and deep tuned crunch metal, with occasional electronic overtones. James‘ raspy voice fits perfectly with the album — picture Korn meets L.A. Guns meets Rob Zombie. It sounds like an original mix, but that’s the best band comparison I can come up with. The guitar work is solid, the solos are skillful, and the bass and drums punch you in the stomach — hard. But that doesn’t compare to the overall attitude of the album, with lines like “I’d rather be dead than to kiss your ass,” and the Grim Reaper telling James that he was a sorry SOB and that he would like to piss on his grave — it’s good stuff!

If you like heavy, raunchy, deep grooving rock and metal with attitude, Mick James Is Dead is definitely for you. It’s very well produced (which is a testament to James‘ recording studio) and if you buy a hard copy, you will wear it out. This album needs to be turned up to 11 for the whole effect to be felt. If Slayer is the music they play in Hell, then Mick James Is Dead is the soundtrack you’ll listen to on the way there — while guzzling booze and juggling the women.