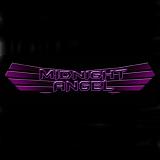 Review:
No one can accuse Philadelphia’s Midnight Angel of pandering to the current commercial scene, because these guys are pure 80s hard rock. Bassist Stevie Lang cut his teeth in The Scream Clan who got their sleazy anthem “American Hair” included on Perris Record’s inaugural Hollywood Hairspray compilation.

Midnight Angel isn’t as heavy as The Scream Clan mainly due to vocalist Bobby Tuggle having more of a dreamy glam sound then a screaming sleaze delivery. I have two issues with these songs, the first being that the vocals sometimes don’t have enough punch for the music being played and the fact that two of the five songs are too slow for my liking. With that being said, “Shotgun Sally” (not to be confused with the Cats In Boots song of the same name) works really well. It has a Motley Crue vibe to it and the vocals are at their strongest. “Tell Me Why” is also a good one as the band dives deep into their glam rock roots.

The band loses me on the last two tracks, they are both too soft for my tastes. They aren’t ballads, but the dreamy vocals just don’t have enough bite to grab my attention.

This is one of those CDs that starts off great but slowly drifts into something else as it progresses. If Midnight Angel keeps things full-steam ahead they could be a great band, or if you’re one of those people that liked the later era Sunset Strip bands you won’t want them to change at all.