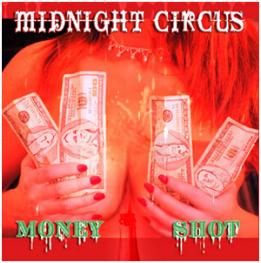 Review:
Prior to spinning this CD I had come to the conclusion that Midnight Circus would score bonus points for such cool album artwork. It isn’t as tasteless as the Scorpions‘ Virgin Killer, but it is sure to offend – in other words you won’t find Money Shot stocked on the aisles of your local Wal-Mart.

For proof of their talents look no further than opening tracks “Psychedelic Trippin'” and “Tonight”. These two tracks are scorchers and show that Midnight Circus has done their glam rock homework – laying the leads on thick and the harmonies even thicker. Sadly the rest of the album pales in comparison to these two gems. Most of the remaining songs follow the pop rock blueprint by being well crafted but coming across as lightweight and safe. For instance, “Only One” sounds a lot like White Lion minus the nasal vocal styling, and fans of Poison should eat up the catchy “Forever Came Today”. However just when you think you have the band’s sound pigeonholed along comes a song like “Dirty Rhythm”, an EZO like number complete with moaning women.

I’m having a hard time determining if Midnight Circus wants to come across as saints or as a parent’s worst nightmare because they play both sides of the spectrum – just compare “It’s Alright” to “S.M.D” (I’ll let you figure out what that stands for). If you like your metal on the poppy side (and I know many do) Money Shot is the album for you. www.circusrock.com