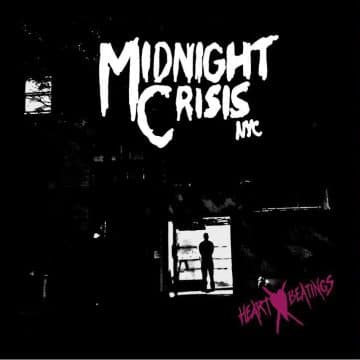 Review:
There have been plenty of great releases thus far this year but Midnight Crisis‘ album Heart Beatings is not one of them. In fact, it’s one of the worst albums that I have reviewed to date this year, if not the worst. I admit that I knew virtually nothing about Midnight Crisis when I started listening to their album and I can’t say that I am inclined to learn that much more about them after a few listens of Heart Beatings.

Midnight Crisis describe themselves as “Dark, Deep, & Dirty Post-Punk Hard Rock band for the Rock n’ Roll Apocalypse” which is probably my first clue that this is not the typical type of music that Sleaze Roxx might cover. A look at the group’s many influences on their Facebook page lists a slew of bands that I either never listen to or have never heard of including Ministry, The Stooges, Joy Division, Cop Shoot Cop, Nick Cave, Mark Lanegan, Big Black, The Afghan Whigs, Leonard Cohen, Lou Reed, The Cure, The Replacements, Lords of the New Church, Mission UK, Lou Reed (Lou is listed twice in the influences!), Mother Love Bone and Phantom Chords. In fact, I would only listen to about 25% of the bands that are listed as influence for Midnight Crisis and that’s being generous since I don’t really listen to Led Zeppelin, The Ramones or Billy Idol but I included them in the 25% in any case.

Where do you start? The singing is simply annoying, mixed pretty low on some of the songs and unpleasant to listen to. I suppose you might describe it as punk rooted. It seems that the recording is pretty cheaply done as the drums have a real “live” feel to them. There isn’t one song that I pine to hear again. There are no real noteworthy melodies to remember. The guitars sound a bit distorted at times. “Bloodbath Wine” is probably the most interesting song with some very early atmospheric Alice Cooper like sounds, a slower pace, more melody, some keyboards and less overpowering guitar sounds. “Midnight Somewhere” is alright with a straightforward punk like delivery. Aside from those two tracks, there isn’t much there worth listening to.

I get that Midnight Crisis are trying to perhaps come up with a new darker take on sleaze type rock but I am not digging it at all. The best part of Heart Beatings is at the end of album closer “Bloodbath Wine” where someone says “Stop” and thankfully, the music and the record do stop.