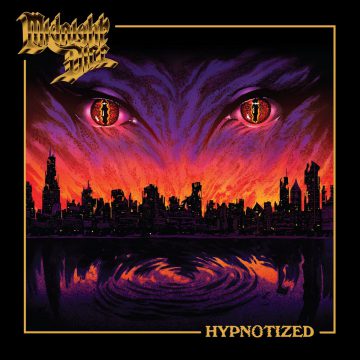 Review:
If you find yourself caught in misty-eyed metal daydreams of cramming into the ol’ Firebird with a pack of pals, sixer of cheap beer, and a faux brown leather case of Dokken, Priest, and Maiden cassettes en route to an ’80s heavy metal parking lot of a night, oh boy! Have Chicago’s Midnight Dice got a treat for you! Not just a treat, but one that comes the fall will fit right into that ol’ cassette case with all your hard-hitting faves – literally. But if your need for a fix just can’t hold out until the tape version arrives, the band’s latest release Hypnotized just landed online for streaming / downloading so long as you can break away from your old world way of rocking, at least for a metal minute.

Trimmed down a member from previous project Satan’s Hollow, the new leaner Midnight Dice is full of all the killer things that made us love hard rock and metal back in the day. The drums pound and gallop along with the bass guitar so furiously that Maiden‘s own Eddie would just have to devilishly grin while the metal Gods surely look down in head banging appreciation of the early Dokken era guitar riffs and no-holds-barred powerful vocals. You won’t find any inaudible low growls or impossible to decipher cookie monster vocals, just kick ass power pipes on par to just about any from the past.

As long as you’re not stuck in the thought process that metal singers have to be of the male variety, then like I said, you’re in for a treat. Singer Mandy Marillo is a powerhouse of a vocalist and in the eyes and ears of some, the knockout punch that puts Midnight Dice over the top and into contention as one of today’s up and coming metal contenders. As true as that may be though, throughout the band’s latest release you can’t help but to dive head bangin’ first into each track well before the vocals kick in. If you’ve just been lookin’ for an excuse to pull that ol’ ride out of the backyard, well c’mon, this one’s got a soundtrack made for a night out on the strip (or maybe for some of us, to run up to return those overdue books to the library) with every one of Hypnotized‘s five tunes all perfectly placed including short opening instrumental “Farewell.”

With a driving riff that brings to metal mind the classic sounds of Priest‘s “Electric Eye” or even “Neon Knights” by Black Sabbath, “Starblind” is the gem here. The kind of metal anthem-like tune down the road fans chant for but don’t take that as meaning the following tracks on Hypnotized aren’t up to snuff. “Speed City” delivers all the driving force of the most pedal to the metal George Lynch-inspired mid-’80s American guitar metal while the title track and closer “Lazer Tears” both build further on the classic Euro-metal style that Midnight Dice so perfectly wear on their denim and leather sleeves.

Some might consider making comparisons a knock but in a rock world filled with a thousand AC/DC sound-a-likes jockeying for a spot at the top of the metal mountain, Midnight Dice with all their influences find a way of still sounding fresh in offering their own take on classic metal. Maybe it’s the rare presence of a female vocalist who doesn’t sound like your typical female hard rock singer or it could just be that the world has waited too long for a tried and true metal sound to return in the capable hands of a new generation of rockers. Or heck, maybe we have just been overthinking the state of metal for too long and are just ready to kick back and rock. Whatever the reason, the time is perfect to go out and get Hypnotized.