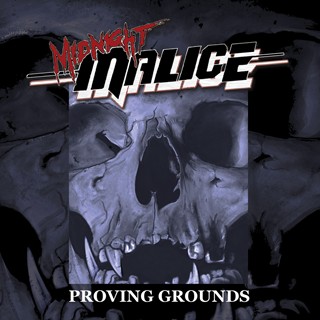 Review:
It is amazing how such a large underground resurgence of traditional heavy metal is taking place on a global scale today — new metal acts are popping up everywhere and doing well. David Byrne, from Talking Heads fame, may prove his backlash theory correct on how music develops. Byrne‘s new wave movement was a backlash against large corporate rock acts of the time like Boston and Journey. This arguably played out again with the grunge movement and the resurgence of modern folk as a backlash against the lip-syncing pop divas.

Today new heavy metal is popping up everywhere and may be the new underground rising against the folky hipsters disguising themselves as rock acts. This is exemplified to the extreme with Midnight Malice — the latest young metal band to grace the streets of Toronto, Canada. This band has been around for a few years, playing the local club circuit, and a CD release party for their debut effort Proving Grounds attracted a diverse, breathing-room-only capacity crowd at Toronto’s Bovine Sex Club on April 5th.

The opening track “Dead Of Night” begins with high pitched siren-like guitar wails and wastes no time slamming into a solid riff that foreshadows what the rest of the album sounds like. A few formerly-released demo tracks, “Sworn To The Horns”, “Flying Low”, and “Pray For Death”, also appear on the CD. The blistering title track serves as a bold statement from Midnight Malice about their brand of metal going forward. Each track delivers a splintering fast tempo experience akin to early punk, but I wouldn’t call Midnight Malice speed metal. Their sound is similar to a lot of the new bands playing traditional metal, however they combine it with a grittier element. While many new traditional metal bands take Iron Maiden as their main influence, what I’m hearing more of with Midnight Malice is a mid-’80s Metallica sound with a dirtier Motorhead edge to it — Lemmy would be proud.

Not many could keep up the pace with Midnight Malice‘s rhythm section consisting of Jared Verlage on bass (recently replaced by hired gun and former Anvil member Glenn Five) and Hunter Raymond on drums. The dual lead guitar work from Chris Nascimben and lead vocalist Caleb Beal is nothing short of stunning as they deliver a disciplined talent over song structures that convey a street-tough balls-to-the-wall attitude.

It’s tough to name a favorite song on this CD, especially if you like your metal on the dirty and fast-paced side delivered by solid and talented musicians. It will be interesting to see where Proving Grounds takes Midnight Malice — I wouldn’t be surprised to see them surface on a few European metal festivals in the months and years ahead. As of right now, there is a growing appetite for traditional heavy metal and Midnight Malice will be sure to satisfy many a metal-heads’ palate.

Review:
I have always loved old-school ’80s styled metal, including the New Wave Of British Heavy Metal spearheaded by such legendary bands as Iron Maiden and Saxon. Unfortunately, most of those pioneer metal bands have been unable to recapture the magic from that era — instead it is a young band from Toronto called Midnight Malice that seems to have that old-school ’80s metal sound down to a T.

Fellow Sleaze Roxx writer Mark Hovarth has been singing the praises of Midnight Malice to me for quite some time now, and I even captured a few of their songs of the tail end of the band’s set back in December. However my impression was always that Midnight Malice was more of a ‘thrash’ band, which is not my genre of choice — I was wrong. Midnight Malice plays straight up old-school metal with mesmerizing guitar solos. I find it hard to describe the band’s exact sound, but certainly lead singer and guitarist Caleb Beal‘s vocals sound a lot like a young John Bush fronting Armored Saint on their classic album March Of The Saint. You can also hear other influences such as Metallica‘s Kill ‘Em All and early Iron Maiden with the two lead guitarists trading furious but melodic solos.

There are only eight songs on Midnight Malice‘s debut album Proving Grounds but I like, and am even beginning to love, all of them. There is no point in highlighting one song over another since they are all very good. Ever since acquiring the band’s CD, it has been just about the only disc that I have been listening to and that really says a lot. The sound quality on the album isn’t the best by any means, but if anything it adds to the band’s charm in that the release sounds raw and unpolished just like many classic albums — such as Iron Maiden‘s self-titled debut. The one thing that I do not understand is how the bassist who plays on Proving Grounds — Jared Verlage — is out of the band just as they release a debut filled with magnificent slabs of metal. It seems like quite a shame to play on the album but not be part of the potentially exciting next chapter(s).

I fully expect that Midnight Malice‘s Proving Grounds will most likely survive stiff tests from many new albums in the coming year, and have a good shot at finishing in my top 5 CDs of the year.