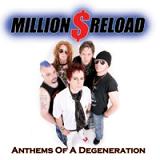 Review:
Myspace could be the best thing that ever happened to our favorite kind of rock (guess what!). It makes it so easy to stumble upon great bands from all over the world that you wouldn’t have had the slightest chance to know, if it wasn’t for the internet. It was no different when I found out about Million Dollar Reload.

Hailing from Belfast, Northern Ireland, Million Dollar Reload deliver no less than 15 tracks (one being a short instrumental) on their debut Anthems Of A Degeneration. And man, does it kick off! After a short banjo-intro not unlike Warrant‘s “Uncle Tom’s Cabin”, “Get It Up” shows what lies ahead. The first comparison that shot in my mind was Buckcherry. Phil Conalane is a dead-ringer for Josh Todd and he shows all his class on “The Last Icon”, a song about dead rockstars, and in detail about Bon Scott. Call it a ballad, call it a mid-tempo rock song, but it’s a song like this which deserves to rule the charts worldwide.

But hey, that’s by far not the only reason to get this one (you’ve ordered it in the meantime, right? No?). Well, there are plenty of rockers, which instantly get in your head, and believe me they’re not going away soon. “Goodnight New York” has a great riff not unlike AC/DC, which (of course) are clearly detectable as an influence as well. Take the instant-hit-chorus of “International Anthem”, take the raw power of “Superslave” or “Fire Your Guns”, but don’t forget to turn it up loud, because that’s what the crisp, excellent production screams for.

Best debut from 2007? Anthems Of A Degeneration very well could be…anyway, time for me to get a Million Dollar Reload right now!