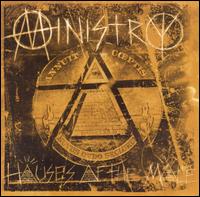 Review:
One word could be used to describe Ministry‘s latest release – brutal! This release is relentless in both its delivery and views. Thankfully there is enough humor thrown into the mix to avoid the feeling of being bludgeoned. If anything Al Jourgensen has become even more agitated and cynical with age, and that makes for some pretty cool music.

The opening track “No W” is absolutely stellar. Al‘s seething hatred toward President Bush is delivered with timely sound bites, undeniable aggression and all too true lyrics such as “ask me why you feel deceived, and stripped of all your liberties, it doesn’t take a genius to explain that today”. “Wrong” hammers home the same message with even less subtlety. “Warp City” brings back the humor of “Jesus Built My Hotrod”, although it does revolve around the story of a man killing his family. “Worm” is the only song that slows things down everything else is at hyper-speed.

If George Carlin were a musician I would expect him to sound like this. Although I have never really followed Ministry‘s career, I enjoyed this album. Attitude and aggression always makes for great music and Al Jourgensen has both in spades. Of course Conservatives won’t like the message repeated throughout, but for people that don’t blindly follow any political parties the message won’t be so offending. Ministry has returned, and is foaming at the mouth! www.ministrymusic.org.