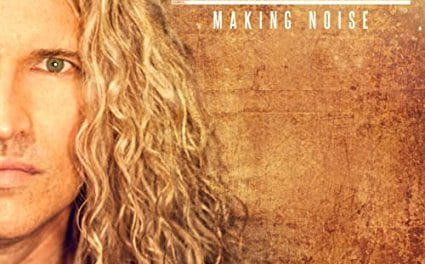 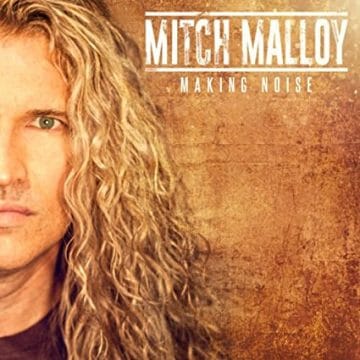 Review:
For those who are familiar with Mitch Malloy, it can be said that he is one super talented musician. For those who don’t, it is time to take notice. Malloy is the man that was slated to replace Sammy Hagar in Van Halen back in the late nineties and then declined because he knew like everyone else did that the next logical step for Van Halen was to get David Lee Roth back in the band. To me that takes balls. I have nothing but the utmost respect for a man with such great integrity.

Life went on and Malloy has continued as a solo artist. His new album Making Noise was released this past fall and I have got to say that this may be the best release of the year. It arrived just yesterday in the mail from Malloy‘s website, mitchmalloy.com. What a great concept. Actually purchasing a hard copy of the music and waiting for it to arrive. Who does that anymore? This guy!!! No compressed iTunes for me. I want the real thing with the full packaging. Upon arrival, I immediately pop it in my disc player and it hasn’t been pulled out since. What an eclectic mixture of genres and diverse musical influence.

More importantly, this album showcases Malloy‘s pure talent. Not only does Malloy sing his ass off on this album, but he plays all instruments, wrote all compositions and handled production duties. “Rock N Roll” starts the album off nicely with cool hits on the snare drum. It then breaks in with clapping being heard in the background. An uptempo rocker that immediately has you singing along. I can’t help but notice the great background vocals that hit you in the face and reach out to you. Immediately, the production stands out to me. This album doesn’t sound overproduced, with overpowering bass and no separation within the music like most albums that you buy these days. Malloy has done a great job of making an album that sounds fresh and clean.

“My Therapy” is the next track and starts with a great guitar riff, that in some ways reminds me of “Balls To The Walls” by Accept. This guitar riff pulls you in and you’re anticipating the vocal line. “My Therapy’ is the first single and you can see why. The hook is so great. More great background vocals accompany the infectious chorus line. I’m left wanting more. The album keeps rolling along as “One Way” features a really cool guitar line that reminds of The Beatles. Malloy then sings the riff underneath. The drums are creating a slow groove that fit perfectly into the song accompanied by a solid bass line. The way Malloy writes his changes within this song is undeniably brilliant. Malloy has mastered his craft and it shows.

Next up is “Speak Of The Devil” and let me tell you this song is pure genius. The slow guitar riff creates such a great groove. Malloy‘s vocal delivery on this song is so creative that you’re drawn in so easily. At the end of the song, Malloy lets out this amazingly long scream that I am sure he must have passed out in the studio when recording that part. “Shook” is a song that feels like something Lenny Kravitz did back in the ’90s. This song really emphasizes Malloy‘s talent on the bass. Great runs all through the song followed by an uptempo straight beat on the drums. Brilliance once again.

The beauty of this album is portrayed on the next track. “It’s Just A Word” features a great piano line, perfectly executed bass and subtle acoustic guitar with Malloy‘s precise vocal approach. I have to make another Beatles comparison because that is solely what I hear. This song is so well written and should be heard on contemporary rock radio in the future. “Alone” gets the album moving again. It has a Cheap Trick vibe and once again features some really fantastic background vocals. The changes in this one are so moving that you’re left saying “Wow”! “I Was Wrong” has a “Turn The Page” feel to it that instantly reaches into Rascal Flatts territory. Malloy‘s country roots are firmly grasped on this track which I find refreshing. It really gives the album colour. The chorus is so good that you almost have tears in your eyes when listening. The emotion this man exudes is astounding and you can’t help but wonder why Malloy is not more well known.

“Life Has Just Begun” may be my favourite track on the album so far. Great heavy guitar riff that creates the perfect mood to the song. It’s almost got that Led Zeppelin “Kashmir” feel to it. Malloy‘s vocals are doubled perfectly throughout the verse and once again the changes within the song are brilliant. The title track to the album “Making Noise” closes out the album. Malloy‘s vocal execution on the subtle verse is perfect. Yet again, the bass is so obvious and precise. A great end to a great album.

Making Noise is nothing short of brilliance as I have eluded to on many occasions throughout this review. The great thing I also find about this release is the duration of the album itself. It’s short at just over 30 minutes. I love that. Leaves me wanting more and I am inclined to just listen again.

If you’re looking for a balls out heavy metal album, don’t look here. This is a complex, well thought out and amazingly produced piece of genius. A true rock album in itself. If that’s what you’re looking for, please do yourself a favour and purchase this album as you will not be disappointed.